Our phone unlocking journey started by pressing two keypad buttons on the Nokia 3310, passed through physical capacitive scanners, and has now reached a new level with in-display fingerprint sensors. Although the technology is not relatively new, it has improved over time to offer a faster and more reliable way of unlocking smartphones. Let us know how in-display fingerprint sensors work in smartphones.


Why does this story matter?
Context


An in-display fingerprint sensor secures your phone and the data within by using your biometric data to unlock the device. With the advancement in technology, we now have different types of fingerprint sensors with their own set of pros and cons. Tech giants are also experimenting with full-screen fingerprint sensors, a concept that can very well change how we unlock our smartphones right now.


How does the in-display fingerprint sensor work?
Technology


As the name suggests, in-display fingerprint sensor technology works by placing a finger on a specific area of the phone's screen under which the sensor is housed. When the finger is placed over the scanner, a camera or image sensor takes a picture of the finger's pattern, matches it with the stored biometric data, and then unlocks the device. The process happens extremely fast.


An optical sensor is the most common type of in-display fingerprint sensor used in smartphones. Optical scanners use a light source, like an LED, to capture a 2D image of the illuminated fingerprint and match it with the registered pattern to unlock the device. However, optical sensors are less secure than passwords or physical scanners and may not work with wet or dirty fingers. 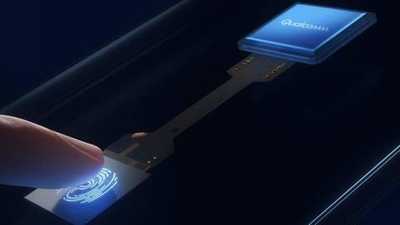 
Ultrasonic scanners are considered to be more reliable since they use ultrasonic sound waves to map your fingerprint pattern and create a 3D image. These sensors work more efficiently than optical ones in case your fingers are wet or oily. However, because the technology is costly, you will mostly find ultrasonic fingerprint scanners in high-end premium smartphones like the Samsung Galaxy S21 series.


In January this year, Qualcomm announced 3D Sonic Sensor Gen 2, which is touted to be 50% faster than its predecessor and offers a 77% larger fingerprint reading area. It can even detect the bloodflow within someone's finger to prevent faking of prints using molds.


In 2019, OPPO had demoed its wide-zone optical fingerprint sensor, which is said to provide a 15x larger scanning area than the existing sensors. It can even read two fingerprints simultaneously. Moreover, Vivo had showcased an all-screen fingerprint sensing technology on its 2019 Apex concept phone. In 2020, TCL had also announced a "Full-Screen Single-Point In-Display Fingerprint Technology" for LCD displays.