NewsBytes Briefing: Twitter finally opens up Spaces, and more
05 May 2021


After beta testing Spaces on minorities and marginalized netizens for a while, Twitter has finally opened up its Clubhouse clone to common folks. That's provided you happen to have at least 600 followers.

For all their lip service to equity and social justice, these Silicon Valley tech oligarchs happen to enforce disgustingly classist and elitist rules when it comes to their prized platforms. 
No discussion involving tech oligarchs is complete without Facebook CEO Mark Zuckerberg. He has bought 600 acres of land on Hawaii, bringing his total ownership of the Island to 1,300 acres.

His neighbors, however, weren't too pleased with the 6-foot walls he built around his property while decrying Trump's wall. They have even gone as far as to denounce his "neocolonialist" antics.


Something strange is happening in the world of autonomous vehicle. The CEO of Cruise Automation tweeted a video of the company's self-learning autonomous cars making way for a cyclist approaching from behind.

Strangely, the software was never programmed to do so, and yet it found a way to swerve and help the cyclist. Now, we pray the AI doesn't learn to do anything evil.


From artificial intelligence to high-fidelity audio, Apple Music might be in the process of serving the veritable ace of spades in the game of streaming audio supremacy.

A mere week after Spotify made the unpopular decision to hike prices, Apple is rumored to offer hi-fi streaming audio at existing subscription fees. If there's any merit to this, Spotify is in a spot of trouble. 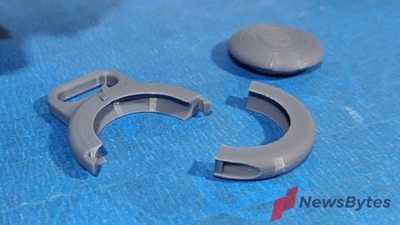 
On a final note, NewsBytes is making headlines . The Apple AirTag's distinct lack of mounting/attachment holes really bothered us, so much so that we took it upon ourselves to design and engineer a 3D-printed case.

If you are tired of Apple's money-grubbing antics, just click here to download (https://bit.ly/3xLvChQ) and 3D print an AirTag case at home absolutely free of charge.