Colombia's most feared, iconic and devastating drug lord, Pablo Escobar died today 26 years ago. He was 44.

The third of seven children born to a peasant farmer and a schoolteacher on December 1, 1949, Pablo's undiluted ambition and ruthlessness first put drug cartels and Colombia on the world map.

On his 26th death anniversary, we look at the King of Cocaine's extraordinary life. 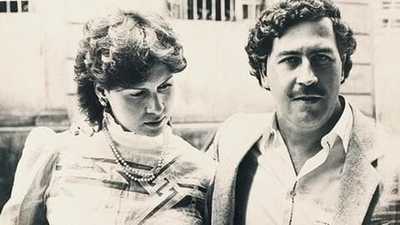 Kidnapping and nondescript murders made him a millionaire at 22. His first arrest followed soon after, at 25.

Escobar rose to fame during the "Marlboro Wars," during which he played a key role in controlling Colombia's smuggled-cigarette market.


Escobar founded the Medellin cartel in the mid 1970s
Beginning


Fabio Restrepo, a known Medellin drug kingpin, was murdered in 1975 allegedly on Escobar's orders. In no time, Pablo took over Restrepo's operations and founded a criminal group that would later become the infamous Medellin cartel.

Escobar expanded the organization at a scale the world had never known, purchasing large quantities of coca paste in Bolivia and Peru, processing and selling it in America.

At the peak of his career, he illegally transported about 15 tons of cocaine daily, earning a profit of $420 million a week.

Credited for revolutionizing the business of drug supply, Escobar smuggled unbridled amounts of cocaine whichever way he could, through planes tires, helicopters and even submarines. Escobar either bribed or killed to get his work done
Crime


Following his mantra of 'plata o plomo' (silver or lead), Escobar either bribed or killed his way to the top.

He was responsible for the deaths of about 4,000 people, including three Colombian Presidential candidates, an attorney general, an estimated 200 judges and 1,000 police personnel.


He once burnt $2 million to keep his daughter warm
Wealth


Thanks to his insanely successful cocaine empire, Escobar had more money than he could count or manage.

He was included in Forbes list of world's richest for seven consecutive years. At his prime, his wealth was estimated at $30bn.

He spent $2,500 a month on rubber bands used just to stack his cash and once famously burnt about $2mn to keep his daughter warm.


Escobar had so much money that rats would eat it
Fact


Escobar purchased a Learjet just to transport his cash. However, despite all the efforts, every year about 10% of his wealth, or $2.1 billion, would either get eaten by rats in warehouses and fields (where the money was usually stored) or would get lost. Escobar's worst fear was being extradited to the US
Politics


Pablo Escobar's biggest fear was extradition to the United States. He once said that he'd "rather have a grave in Colombia than a jail cell in the US".

Trying to bend extradition laws, he was briefly elected as an alternate member of Colombia's Congress. He even offered to pay the country's estimated debt of $10 billion in exchange for an amnesty for drug barons.


He made his own luxurious prison, La Catedral
Details


In 1991, Escobar agreed to surrender but on an unusual condition that he be detained in his own prison, guarded by his men.

The Colombian government agreed and hence luxury prison La Catedral was built with facilities such as a nightclub, waterfall, soccer field, casino and a spa.

However, Escobar escaped in 1992 when officials decided to move him to a standard jail.


Despite his blood-soaked business dealings, Escobar was hailed as the modern-day Robin Hood among poor Colombians. All his life, he generously donated for community housing and food programs. He also funded the construction of several schools, churches, hospitals, and football stadiums. It's popularly believed that he was gunned down by the Colombian Police on December 2, 1993, on the rooftop of a hideout in Medellin.

However, many, including his son, believe that Escobar killed himself knowing that he'd be extradited if caught.

About 25,000 people, mostly poor Colombians who revered him for his philanthropy, attended Escobar's burial in Medellin.


He's arguably the most well-documented drug lord of all time
Truth or fiction?


Escobar's eventful life has been the inspiration of innumerable films, books and TV shows, most recently Neflix's 2015 series, Narcos.

Though critically acclaimed, the web series was criticized for distorting facts. In 2016, Escobar's brother, Roberto, threatened to sue Netflix for $1 billion over alleged misrepresentation.


Escobar always wanted to be the President of Colombia.

His biggest single cocaine shipment to the United States weighed 51,000 pounds. Depending on the amount of cocaine a pilot smuggled, they could earn up to $500,000 a day.

Escobar had a zoo of his own with about 200 animals, including elephants, ostriches, zebras, hippos and giraffes, most were smuggled on his drug planes.