New Delhi: Amid the lockdown, an advertisement to hire volunteers for Civil Defence Corps has left the Kejriwal government embarrassed and red-faced. The glaring blunder in advertisement has not only prompted rivals to attack the ruling dispensation but also local resident to vent ire for showing Sikkim as an independent country.

The AAP government on Saturday issued an advertisement to recruit ‘Civil Defence Corps Volunteers’ in many newspapers including English & Hindi dailies. In the ad, Delhi govt seeks to hire nearly 200 volunteers but refers Sikkim as a separate nation much like Bhutan and Nepal.

In the eligibility criteria, the advertisement states that any citizen of Sikkim, Nepal and Bhutan or a resident of Delhi are eligible for the post. Moreover, the advertisement also has a photo of Chief Minister, thereby validating the details of adv. 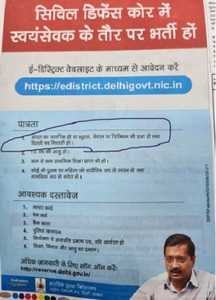 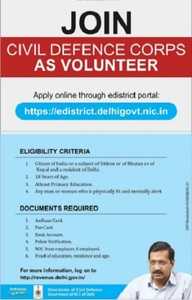 BJP tears in to Kejriwal govt for Sikkim fiasco

Delhi BJP President Manoj Tiwari took Kejriwal govt to task for showing Sikkim as a separate nation in its advertisement.

.@ArvindKejriwal Ji .. what is this ? Sikkim is an integral part of India 🇮🇳..
what are you up to, Nation wants to know now!! pic.twitter.com/AtCy8Jalcv

“Arvind Kejriwal ji… What is this? Sikkim is an integral part of India. What are you upto, Nation wants to know” tweeted Manoj Tiwari.