New Delhi: A day after Finance Minister Nirmala Sitharaman claimed ‘millennial mindset’ as one of the major reasons for auto sector slowdown in the country, #boycottmillenials trended on social media.

Netizens are sharing hilarious tweets with #boycottmillenials and #SayItLikeNirmalaTai which will surely leave you in splits.

One of the users shared a picture of Yoga guru Ram Dev performing an ‘aasan’ and wrote: ‘Oxygen crisis will be occur because inhale more oxygen in the morning.’ 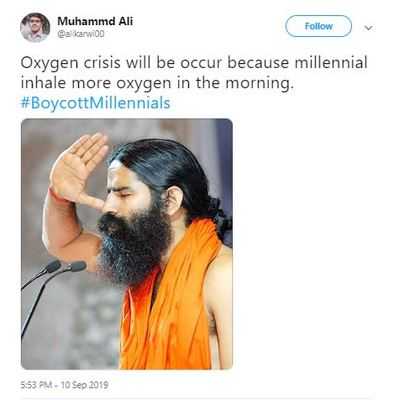 Another user shared a hilarious picture of a boy who is dressed in cool funky sunglasses while holding a gun. “Sahoo collection is down because Millennials prefer Hero Alom instead of Prabhas,” he tweeted. 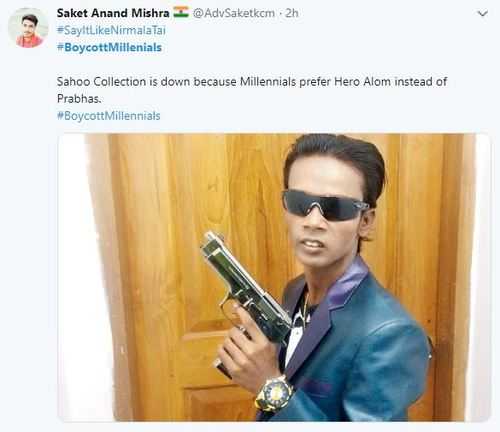 Yet another chimed in and wrote, ‘The cosmetic industry is down because millennials are using filters and editing apps on Phone.’

Another tweet read, ‘LIQUOR sales is down because Millenials are drinking ethanol in chemistry labs.’ 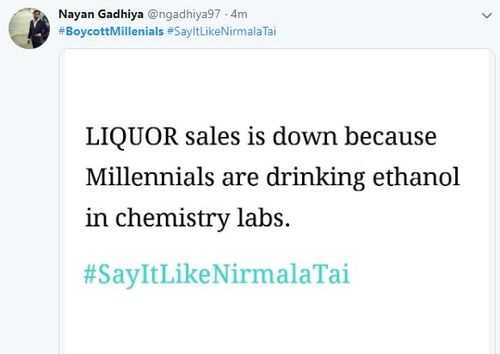 ‘BHEL production and sales are down because millennials prefer paani Puri’ has been one of the tweets widely shared by twitter users.

On Tuesday, Sitharaman, at a press conference, had said: “The automobile and components industry has been affected by BS6 and the mindsets of millennial, who now prefer to have Ola and Uber rather than committing to buying an automobile.” (ANI)