New Delhi: Day 3 of the World Test Championship final between India and New Zealand could be disrupted due to rainfall.

“Heavy showers continuing during the morning, gradually easing during the afternoon to allow some brief sunny spells. Staying dry into the evening and overnight. Maximum temperature 21 °C,” according to the UK Met department.

Weather expected in Southampton during the Day 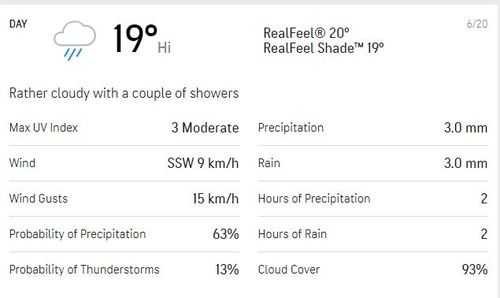 Weather expected during the night in Southampton 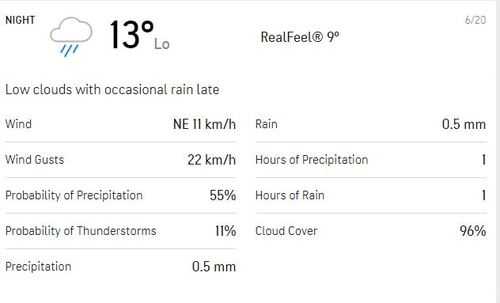 The third session on the second day of the ongoing World Test Championship (WTC) final between India and New Zealand at the Ageas Bowl did not see much play and rain forced early stumps.

At stumps on Day Two on Saturday, India’s score reads 146/3 with Virat Kohli (44*) and Ajinkya Rahane (29*) at the crease. The final session on Day Two saw 26 runs being scored in 9.1 overs. Resuming the final session at 120/3, Kohli and Rahane batted out 15 minutes and once again, the match had to be stopped because of bad light. However, it proved to be a short break as the players made their way back to the pitch within 30 minutes.

Earlier, New Zealand skipper Kane Williamson won the toss and opted to field first in the much-awaited World Test Championship (WTC) final against India. Incessant rain saw the opening day’s play being washed off at the Ageas Bowl on Friday.