The former capital of Marwar, Jodhpur, is one of the most enchanting cities of Rajasthan, with its mighty Mehrangarh fort overlooking the city. The city is called the Blue City as it looks completely blue from an aerial view because of its blue walls and blue houses. As the second-largest city in the Indian state of Rajasthan, Jodhpur served as one of the historical capitals of the Kingdom of Marwar with some of the most famous historical heritage in India.

Jodhpur is famous for its blue houses, Mehrangarh fort and not forgetting delicious snacks and sweets. Here, you will come across hundreds of shops, eating joints, and the Sardar Market where you can pick souvenirs for future reference. The Jodhpur city came into existence in 1459 formed by Rao Jodha, a Rajput chief from the clan Rathore. Initially, the town of Mandore served as the capital of Marwar. However, Jodhpur took over, thanks to its central location that enabled the trading of Opium copper, dates, and many other goods. It also served as a link between Delhi and Gujarat. During the British colonial period, Jodhpur had the largest land area in Rajputana. The land prospered with peace and grew in population. The merchants in the area also flourished with their trade dominating the rest of India.

Well known for its mouthwatering food, Jodhpur sweets are spread all over India. Some of the foodstuffs that identify the area's culture are Mirch Bada and Mawa Kachori, which you will find very delicious. Moreover, Indian cuisine is said to have originated from Jodhpur. As a coastal region of the Thar Desert, most nomadic tribes dominate the area, and that's why the Gypsy group settled in some parts of the city. Luckily, Jodhpur has done well by preserving its culture hence tourists can visit Sadar Bazar for a beautiful cultural experience.

Dance and music are important parts of Jodhpur culture, especially folk dances and music. The people of the city perform folk dances during festivals, celebrations, and religious occasions. Two of the most famous dances are the “Chari dance” and “Ghoomar.”

Concerning Jodhpur's climate, it is of an extreme type. In other words, the temperature range in the city is very high. The weather is typical desert weather, hot and dry. Throughout the whole year, the city is bright and sunny, so it is called Sun City. The best time to visit the city is between October and March; the climate conditions are the best during that time.

Places you must visit in Jodhpur

Jodhpur flocks with tourist year after year, thanks to the breathtaking sites the location has to offer. Some of the sites include Mehrangarh Fort, Ghanta Ghar, and Clock Tower. Moreover, Jodhpur is rich in history, sharing centuries of art and architecture. 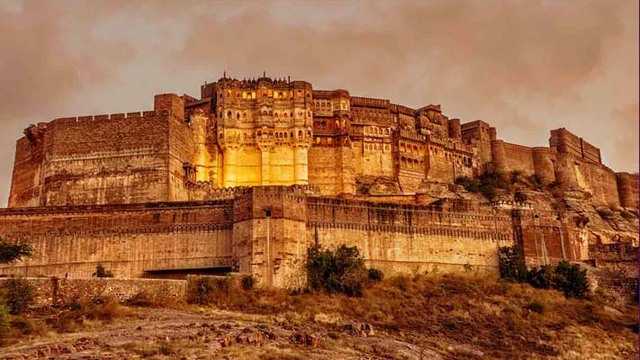 Known as the largest and most famous fort in India, The Mehrangarh Fort is an impressive description of preserved heritage. Presently serving as a lucrative museum, it blossoms with 15,000 items right from Maharaja Gaj Singh II's collection. There are cultural performances that happen daily inside the fort where you can enjoy music, folk art, and many more.

Built-in 1899, the Jaswant Thada is an intricately crafted cenotaph created in memory of Maharaja Jaswant Singh. The structure shines with white marble, lattice screens, and portraits of Rathore rulers. Here, you will experience a peaceful environment while enjoying the gleaming view of the city. In 1944 the palace was completed serving as one of the last grand palaces in India. Up to now, the royal family occupies a section of it, with most of the palace converted to a luxurious palace hotel. However, spending the night inside the hotel can cost you more than $550, which is relatively pricy, but you can still catch a glimpse of the hotel. Inside the hotel, you will find world-class restaurants and a magnificent museum. Here, you will get old photos of Maharaja and his family and a vintage collection of cars.

It may cost you a lot, but the experience is worth it.

4- The streets of the Blue City If you are looking for beautiful backgrounds to take outstanding photographs of, then visit the Streets of the blue city. Known as Navchokiya, the location is a lovely site for tourists. Here, you can spend your time strolling along the streets, and you may also choose to get a guide to help you find your way through the chaotic streets.

Traditionally, this 18th-century Lake had a significant impact on Jodhpur's water management system. The Lake offers a beautiful site to take outstanding photographs with the Mehrangarh Fort in the background.

The Lake guides you through several exciting temples which are hidden around it.

Your trip won't be complete without a stroll in the Rao Jodha Desert Rock Park. Developed back in 2006, the park extends 200 acres fitted with foliage that varies throughout the year. Here, you will come across 80 different native species of plants from the Thar Desert. It's fantastic to know what lies inside the living desert. Seen in the backdrop of the movie, The Dark Knight Rises, Jodhpur attracts hundreds of thousands of visitors from all over the world. Jodhpur is conveniently located in the center of Rajasthan making it easier for people visiting Jodhpur to explore other destinations of the state.