Hyderabad: With the arrest of six persons, Cyberabad Police on Friday apprehended a master of making and printing fake visas and forgoing passports in the city.

Besides the arrest of the six members of the syndicate, police have recovered large numbers of passports, documents, of various countries’ arrival and departure stamps, forged holograms and much more form the possession of the accused.

According to VC Sajjanar, Commissioner of Police, Cyberabad, the special operation team arrested two middlemen involved in the racket have been identified as Shaik Basheer (60), a vagabond and resident of Kumbakonam town in Tamil Nadu and Balu Prasad, who is absconding and a resident of Tamil Nadu. 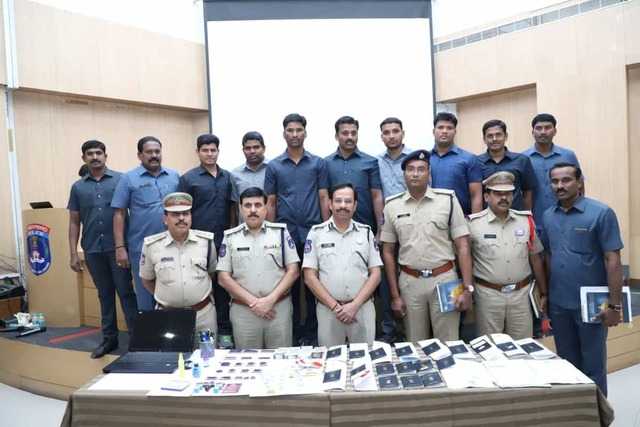 Commissioner of Cyberabad Police, Special Operations Team (SOT), and other police officers displaying the recovered material from a racket involved in printing fake visas and forgoing passports on Friday.

“While the mastermind behind the syndicate has been identified as Relly Kunbender Rao (32), a native of Tanuku Town in West Godavari of Andhra Pradesh (AP), and the entire racket was led by him. Relly’s associates have been identified as Kanapala Mohan (41), Indeti Augustin (40), Sirimuvala Ruthamma (44), Kollati Ventara (35), all of them are the residents of West Godavari District of AP and Yenamadala Sunitha (36), a resident of East Godavari District of AP,” said the Commissioner.

Two complaints were received that, two persons from AP were duped to the tune of lakhs on the pretext of providing them jobs in Kuwait.

During the investigation, the forged visa stickers and stamps were provided by Relly Kunbender Rao, he was nabbed at a hotel at Shamashabad in Hyderabad and he disclosed that Balu provided the stamps and Basheer provided the stickers after which they were also arrested.

Accordingly, Basheer disclosed that the forged stickers were prepared by Kumar, a resident of Sri Lanka who has not been arrested yet and on Relly’s instance a complete material, printing forged stickers, passports and a cash of Rs. 2 lakh including forged visa stickers of Kuwait and Dubai and 16 forged passports, forged bio-data pages of Indian passports and other devices were seized.

The gang usually targeted young woman job aspirants form Andhra Pradesh who wanted to get jobs in foreign countries. They lured them initially in Andhra by giving them false assurance of providing them good jobs in Kuwait with the Police Clearance Certificate (PCC) and medical certificate.

The woman who was willing to go Kuwait have been sourced through Relly’s agents, as to visit Kuwait one would require immigration clearance. To avoid clearance the suspect would send the woman aspirants to Dubai on a tourist visa and from they would send them to Kuwait.

For this, he has prepared documents like PCC, fake stamping certificates, medical certificates. This is how the racket used to send the persons from India to Kuwait and Dubai by taking the amount.