Unity is Divinity, a theater play staged in the backdrop of CAA

Hyderabad: A Mega theater performance on “Unity is Divinity” was staged here in the city at Shilpakala Vedika at Madhapur on Sunday till late evening.

It was staged in view of the current trends of Religious Conflicts in India and outside India.

Speaking on the occasion Dr. B. Janardhan Reddy said Civilization and Character is missing in the current education. We need an education that injects these in the current generation. I am happy Abhyasa is teaching education and culture.

Telangana Government is seriously considering injecting values in the younger generation before the age of 5 years, he announced.  Maharashtra and Goa have done this. They introduced “Mulyavardhan” a school-based value education programme, which aims to enable schools to provide a value-based education to nurture caring, responsible and democratic citizens, Dr. Janardhan Reddy shared.  It is now impacting students in over 40,000 schools in Maharashtra and 780 schools in Goa,

He gave Ten Commandments which evolved recently for the success of the students, which include raising up from bed on their own before sunrise, maintaining personal hygiene, 100 % attendance, good listening; everyday progress; putting 100% effort; imbibing culture, involving in art, fitness, and games.

Sudheer Babu, an all-rounder, a sports star, and actor told,  loosing sometimes is good. Loser learns more than the winner. Winning by losing makes one stronger.

Vinayaka Kalleetla said we write our own plays. We don’t copy. Our themes are well researched. Our students write dialogues. Seniors train juniors. It took one month for preparation. Organized by Abhyasa International Residential School, as part of Hemanth Utsav, an annual event, it was planned in the backdrop of US-Iran Conflict, Agitations for & against CAA & NRC

The commonality in all these conflicts is Religion, but ironically. The play conveyed that  Religion was created to bring harmony & love into human lives, informed Vinayaka Kalleetla, CEO & Founder Director of Abhyasa International. 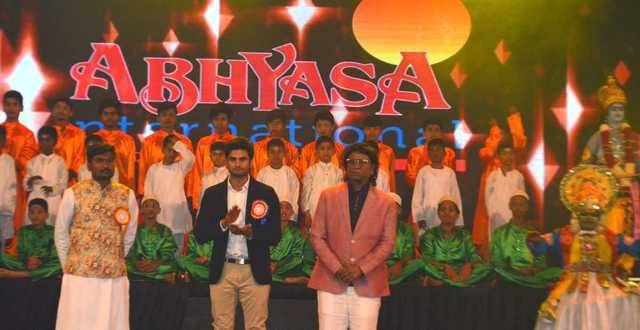 Unity is Divinity, a Mega Skit performed by 600 students on a single stage.

Religion, says Vianayaka Kalleetla, which is perhaps the most misused instrument in creating mistrust among people… India possesses the maximum cultural & religious diversity than any other country in the world… and it’s only here that convergence can be found to redeem ourselves from this malady…

The 90 minutes soap opera featured the evolution of all Religions and emphasized the importance of unity among people and nations to promote peace and harmony in the society that we live in.

Six hundred student of grades 1 to 12 got together showcased their artistic talents in depicting the evolution of various religions, namely Hinduism, Buddhism, Christianity, Islam and Sikhism… through a scintillating Opera that aims to establish the brotherhood of man and the fatherhood of God…

How do we act responsibly and take accountability for our actions forms the crux of the Opera titled: “ Unity is Divinity “ presented in 3 languages Telugu, Hindi, and English. Abhyasa School always picks of contemporary and topical topics for its Hemanth Utsav to enlighten children on such issues.  It is a must to be featured event.  We request media to kindly depute your staff reporter, photographer and camera crew.

It was staged in front of 2000 guests

It was the 24th year of Hemanth Utsav. Next year it will be celebrating Silver Jubilee.

Every student at the school took part in the performance.  It was quite rare that all students gave a performance on a single stage.

The play concluded with the most important message that all the religions preach the same values which include—Love, Unity, and Togetherness.  That same was demonstrated by the skit. It is the people who are diving people.  We must against such people who divided and create differences among the people.  Discover the Divinity within you. The play conveyed.

Planet Projections made arrangements for the mega play; Narsing Choreographer did the choreography for the skit, Ganesh of SVJ Recording provided Audio support for the play, Damodar of Mayur Art helped in Makeup and Subrahmanyam Academy of Performing Arts trained students in Classical Dance and Music. All in all the mega show was put up together with many experts extending their professional touch.