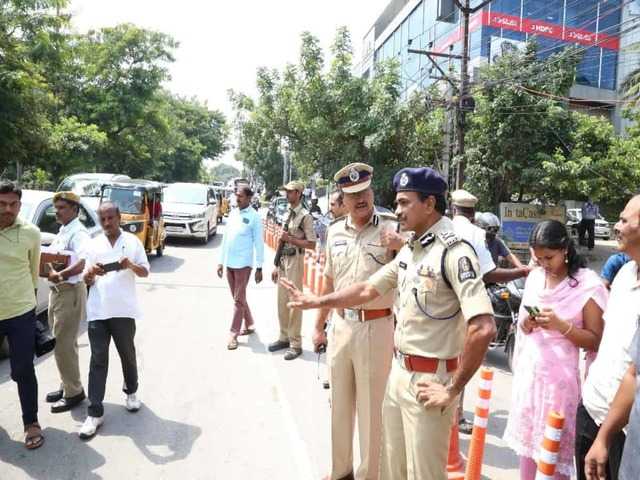 Hyderabad: City police commissioner CV Anand on Monday urged public to opt for public transport instead of personal vehicle in order to reduce traffic on the roads.

The commissioner inspected the preparation on Jubilee Hills Road no. 45 and discussed some of the required changes with the traffic police. The traffic authorities briefed Anand regarding the inflow, volumes and load of traffic on the local roads.

Addressing the media, Anand cited the increasing number of vehicles in the city as a reason for increased traffic jams. He then urged the public to cooperate with the traffic police in order to have free-flowing traffic.

Speaking of the ROPE program he said, “To reduce congestion on roads, Traffic Police have started this special drive to clear the encroachments and obstructive parking. More special drives will be initiated to keep a check on traffic violations including triple riding, cell phone riding, wrong side driving etc., to bring order on the city roads.”

He also urged the public representatives to cooperate with the traffic police during enforcement and VIP movements.

He reiterated that the commuters must follow the signals properly. All the establishment owners are being sensitised to keep the carriageway clear by providing park space.

Over 472 motorists and 18 establishment owners were penalised for traffic violations as part of the ‘ROPE operation’. The 25 traffic units of Hyderabad traffic police conducted the drive across the city and the total amount of fines imposed amounted to Rs 3,65,000 on the first day of the operation.