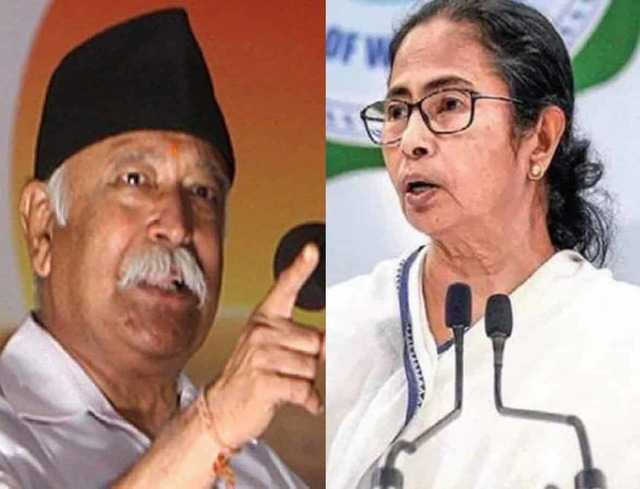 Politics heat up in West Bengal over Netaji's birth anniversary

Kolkata: On the occasion of the 126th birth anniversary of Netaji Subhas Chandra Bose, politics heated up in West Bengal with various parties playing their political cards.

While Rashtriya Swayamsevak Sangh chief Mohan Bhagwat claimed that RSS is treading Netaji’s path for India’s wealth creation, West Bengal Chief Minister Mamata Banerjee said that the current Union government has disrespected the national hero by abolishing the Planning Commission, which was the brainchild of Netaji.

While addressing a function on the 126th birth anniversary of Netaji in front of Shahid Minar in Kolkata on Monday, Mohan Bhagwat said, “Before India’s independence too there were different forces of different political beliefs. However, their aim was one and only independence. But Netaji’s aim was not just achieving the independence of the country. His parallel aim was also the wealth creation for India. RSS now is exactly treading through that path for the country’s wealth creation as shown by Netaji”.

“No one did anything for him. But he gave up everything for the country. He had led the people by being among them. He was a leader. But at the same time, he chose to remain in the battlefield along with his soldiers. The commanders generally do not go to the battlefield. However, Netaji came from Singapore to Assam leading his army,” the RSS chief said.

Ridiculing the event organised by the RSS in Kolkata, Trinamool Congress state general secretary and the party’s spokesman in West Bengal Kunal Ghosh said, “Netaji was opposed to RSS’s ideology. Netaji was in favour of secularism and RSS is propagating divisive politics. They have no right to speak about Netaji”.

Countering Kunal Ghosh, BJP’s national vice- president and the party Lok Sabha member, Dilip Ghosh said Netaji is above all such politics. “Netaji is a national hero. RSS also believes in nationalism and patriotism, and is dedicated to work for the country inspired by Netaji’s ideology,” Dilip Ghosh said.

“Netaji left ICS and dedicated himself to the country’s freedom struggle. Netaji stood alone in front of the Britishers. Britishers said they were not afraid of Mahatma Gandhi. Britishers were afraid of Netaji Subhas Chandra Bose. There were several freedom fighters on Bengal’s soil so the Britishers had to move to Delhi,” Thakur said while addressing the youth at the ‘Yuvotsav 2023, Swavalambi Bharat Abhiyan’.

Thakur also stressed that it is the responsibility of the youth to fight against those trying to “murder democracy.”

Earlier, Netaji Subhas Chandra Bose’s daughter Anita Bose-Pfaff said that RSS ideology and the nationalist leader’s ideas of secularism and inclusiveness are “poles apart and do not coincide”.

She agreed that the fanfare over the celebration of her father’s birth anniversary is to “partially serve their (BJP, RSS) own interests”.

As far as ideology is concerned, the Congress has a lot more in common with Netaji than any other party in the country, she said.

BJP and RSS do not reflect the idea of respecting all religions as preached by Netaji, who was a devout Hindu but believed in respecting other faiths. He was in favour of productive cooperation between members of different religions, Bose-Pfaff said.

Subhas Chandra Bose established the Azad Hind Fauj. While there is a controversy over Bose’s death in a plane crash in Taipei on August 18, 1945, the central government had in an RTI (Right to Information) in 2017 confirmed that he had died in the incident.

Netaji has been a point of interest for filmmakers across the country. His heroic life, philosophy, bravery and mystery around his death have given birth to many cinematic representations over the years.

With inputs from agencies