Deconstructing the Champions League goalscoring behemoth that is Lionel Messi

Lionel Messi is one of 38 players to have made at least 100 appearances in the UEFA Champions League. He is also one of only four active players (seven overall) to have scored 50 goals in the blue riband competition of European club football.

Messi made his Champions League debut for Barcelona in the 2003-04 season when he came on as a substitute against Shakhtar Donetsk. A maiden goal in the competition didn't take long to arrive as the diminutive Argentinian found the back of the net against Panathinaikos in the 2004-05 season.

By scoring his first hat-trick in the competition against Arsenal in 2009-10, Messi emulated compatriot Claudio López (2000-01 for Lazio against Shakhtar Donetsk) in becoming the second player from Argentina to score three or more goals in a Champions League game.

Since then Messi has netted three or more goals in a Champions League game on eight occasions, which is a tie with Ronaldo for most hat-tricks in the competition. It is a record for most hat-tricks scored for one club (Ronaldo has 7 for Real Madrid and 1 for Juventus).

Messi is one of 12 players to score four or more goals in a game and is the only one to do so on multiple occasions (four). The Argentinian scored four against Arsenal in the 2009-10 quarterfinals, five against Bayer Leverkusen in 2010-11, four against Ajax in 2013-14 and five against APOEL in 2014-15. 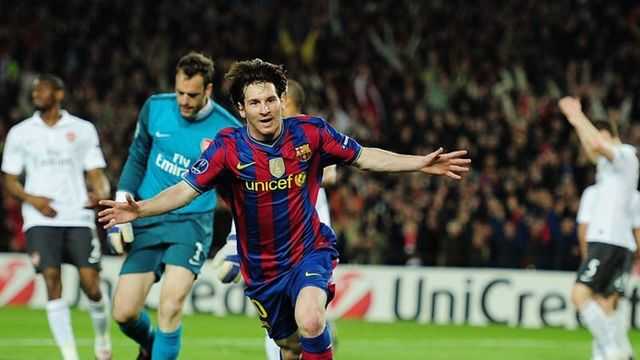 Messi's record of scoring five goals in a Champions League game is a feat equaled only by Brazilian Luiz Adriano, who did so for Shakhtar Donetsk against BATE Borisov in 2014-15.

Along with Ronaldo, Messi is the only other player to score multiple Champions League hat-tricks in a season on two occasions.

Messi's 112 goals in the competition proper (group stage to final) are second only to Ronaldo's tally of 126 goals. It is, however, a record-Champions League goal tally scored for a club (Ronaldo's 105 goals for Madrid places the Portuguese in second position).

The Argentinian's 66 goals in the group stage of the Champions League is a record which is 5 goals clear of Ronaldo's tally. 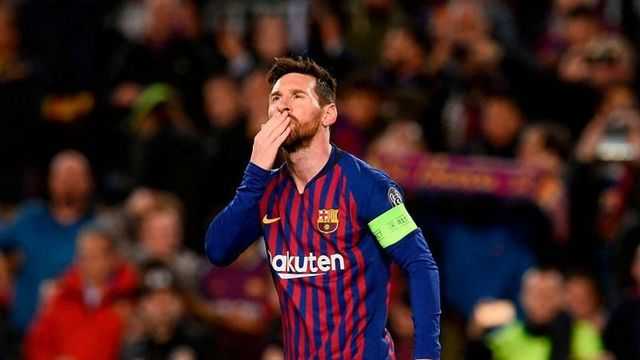 Messi rejoices after his record-extending 66th group stage goal, scored against Lyon in 2018-19

In 68 Champions League games when Messi has scored, Barcelona have won 57 times and lost just thrice. The Argentina captain has scored his goals in the competition against 32 clubs from 16 countries, with Arsenal being his favourite opposition against whom Messi has found the back of the net 9 times.

As the 2019-20 UEFA Champions League season gets underway, Messi would look to add to his record haul of group-stage goals, steer clear of Ronaldo's 8 hat-tricks in the competition and look to emulate Raul by scoring in a 15th consecutive season.

By the end of the season, Messi would look to break a tie with 21 other players and join a select group of 10 players to have won the European Cup/Champions League on five or more occasions.