The New Day kicked off the show with a six-man Tag Team match against The Revival & Randy Orton.

The New Day vs. The Revival & Randy Orton 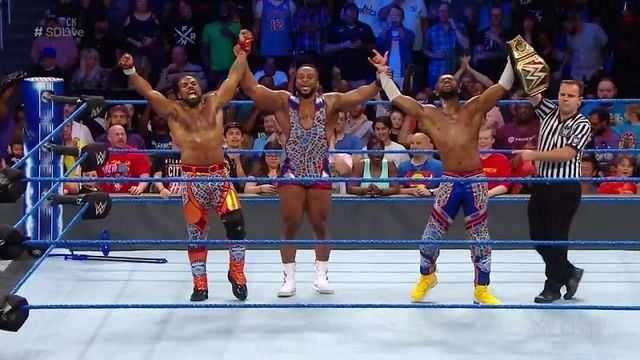 Big E started the match with a huge suplex to Dash Wilder. He set Wilder on the Apron and hit a big splash before tagging in Woods. Dawson came in and took control of the match but Woods hit a rolling elbow to take him down.

Orton and the WWE champ were in next and Kofi and Woods took turns hitting move after move on The Viper before E came in with the top rope splash. The New Day were dominating as we headed to our first commercial break.

We returned to see the Revival in control with Woods in a submission hold in the ring. Dawson went for Woods' injured knee as the match went on. Orton joined in next and Woods tried to fight back as best he could. Orton threw Woods over the announce table after he was tossed outside by Wilder.

Woods made the tag to Kofi and cleaned house before hitting an SOS to Orton but Dawson broke the pin. Orton caught Kofi in a Hanging DDT and got ready to end it. He let The Revival set Kofi up for the combined finisher but Big E took out Orton from the apron. Kofi hit the Trouble in Paradise on Dawson for the win.

The #NewDay are definitely feeling great as they work together to take down @RandyOrton and #TheRevival. #SDLive

Brock Lesnar came out to the ring just as the match ended and Kofi sent the rest of his team out of the ring and got ready for the confrontation.

Paul Heyman made the introductions and said that Brock was looking to challenge Kingston for the WWE Championship. The match was to take place at the Friday night premiere of SmackDown on FOX and Kofi accepted the challenge without hesitation.

Brock reached for a handshake but hit an F5 on Kofi, taking the title and throwing it on Kofi's face before walking out.

.@BrockLesnar is BACK and wasted no time in challenging @truekofi to a BATTLE for the #WWEChampionship on the FIRST #FridayNightSmackDown on #FOX! #SDLive pic.twitter.com/lWTqLPsIP2

Backstage, Sasha Banks and Bayley refused to talk about The Boss' match with Charlotte later in the night.

Note that hair whip, @KaylaBraxtonWWE...#TheBoss @SashaBanksWWE will do her talking IN THE RING when she battles @MsCharlotteWWE TONIGHT on #SDLive pic.twitter.com/sx9A3VLPo0

Michael Cole was interviewing Erick Rowan backstage and he kept stressing that he was a leader and not a follower. He added that the WWE Universe, Roman and Daniel Bryan would all be sorry for disrespecting him.

"The entire WWE is going to learn to NEVER disrespect me again!" - @ERICKROWAN #SDLive pic.twitter.com/GVhKQ7Z665

Ali was out for a match against the Intercontinental Champion, Shinsuke Nakamura. Zayn came out before the match and distracted Ali, setting him up for a Kinshasa that knocked him out. The match had to be called off and Shinsuke celebrated.

Kevin Owens showed up in the audience with what looked like a lawyer and moments later, Shane McMahon was served with legal trouble from what seemed to be a member of KO's legal team.

Owens was enjoying the show when Shane came out with a group of security officials who surrounded the ring and the envelope he was just given in his hand. 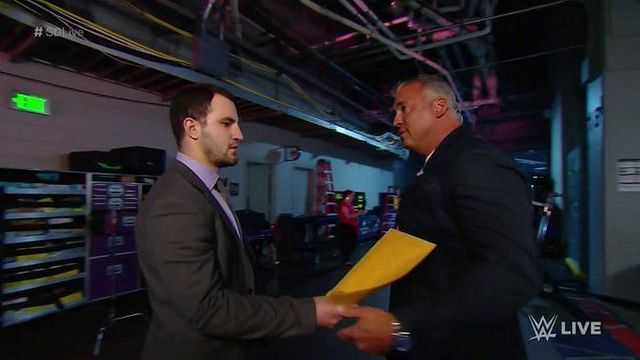 Shane O'Mac has landed himself in hot water

Shane McMahon addressed Kevin Owens and asked him to walk up to the ring and explain the situation. The security stepped in between Shane and KO but McMahon sent them outside as he wanted to talk 'man to man'. Shane revealed that Owens sued him for wrongful termination and sought 25 million dollars as damages.

Kevin explained the situation of his release and that Shane himself tapped out to Chad Gable. Owens said he had no fault in the situation and Shane fired him regardless. Also, KO was an official at the time and Shane attacked him, which is illegal for a competitor. He added that was he was looking to do as much damage that he could to Shane and if KO won the lawsuit, Shane would be fired, before walking out.

"All I wanna do is hurt you, but I finally realized the best way to do that is hit you where it hurts the most and that is your wallet and your pride..." - @FightOwensFight #SDLive pic.twitter.com/OYwUrNDWRZ

Charlotte and Ric Flair were backstage and so was Daniel Bryan, getting ready to hit the ring.

Hip-hop artist Offset was there to introduce Charlotte Flair before her match with Sasha Banks.

Charlotte kept the pressure on as the match proceeded. The Queen countered a crossbody into a fallaway slam and then hit a neckbreaker. Charlotte locked in a Boston Crab but Banks fought out of it. Sasha went outside off a kick and Charlotte went for the Moonsault to the outside on Banks and Bayley.

Charlotte got the Figure Four and Bayley broke it up, getting Banks a DQ.

Charlotte was being attacked 2-on-1 when Carmella came out to make the save and they managed to kick the heels out of the ring. 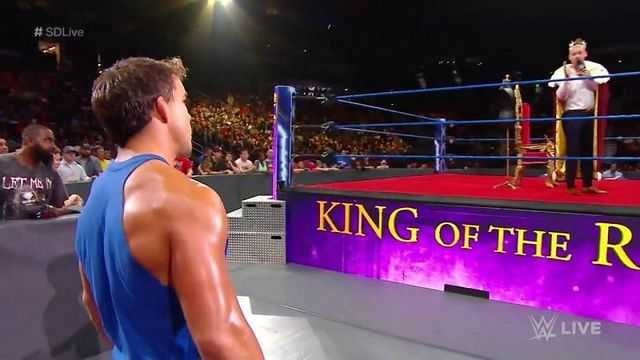 King Corbin came out to the ring and the royal robe and the crown was handed to him as the ceremony started. Corbin put on the attire and the audience was booing him as the music stopped. He said that he was a fair King and demanded the respect of the WWE Universe. He added that anyone who would oppose him would be met with an Iron Fist.

He called Chad Gable out to the ring, only to humiliate him. Gable sent Corbin through the throne and tore off his robe. Gable hit him with the royal scepter and Corbin retreated. Gable picked up the crown and stepped on it, crushing the ornament and then throwing it at Corbin who looked like he was in tears.

Corey Graves was handed the broken scepter and he looked to be deeply distressed by what happened to the King of the Ring.

Heavy Machinery vs. The B Team

The B Team surprisingly had the upper hand early on as they made quick tags after isolating Tucker in their corner. Curtis Axel made the tag to Dallas and so did Tucker. Otis came in and was all fired up as he took out Dallas and Axel without much effort.

Otis went for the Caterpillar on Bo before tagging in Tucker for the compactor. Heavy Machinery went for the pin and got the three count. 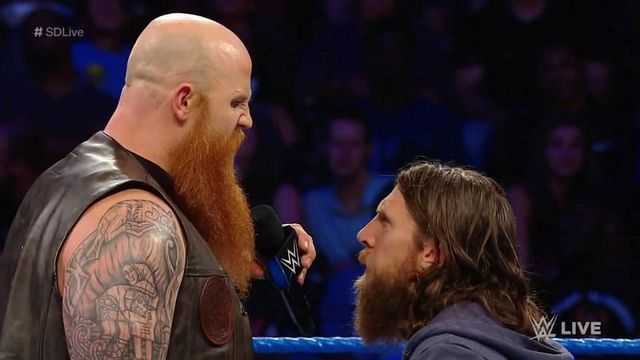 Daniel Bryan came to the ring to some loud cheers. But the Planet's Champion hit back at the crowd saying they were the same people who accused him of being part of the attack on Roman Reigns. He revealed that he came out tonight to address the situation regarding Erick Rowan.

The former WWE Champion said he always treated Rowan as an equal and a friend. Rowan came out and said that Daniel always treated him like a follower and never asked for his opinion. Daniel screamed at Rowan and said he betrayed and a fight broke out as Luke Harper rushed to the ring. Roman Reigns came out to even the odds but The Bludgeon brothers took them both out, as well the officials that rushed to the ring.

The Blugeon Brothers tore the ringside area apart and sent Bryan through the announcers table.

The show started off great and some great matches were on the card.