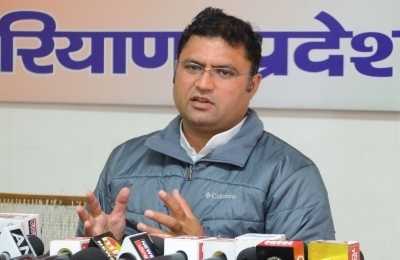 Chandigarh: Haryana Congress President Ashok Tanwar addresses a press conference in Chandigarh on Jan 29, 2019. (Photo: IANS)New Delhi, Sep 15 (IANS) The feud between former Haryana Chief Minister Bhupinder Singh Hooda and former state party unit chief Ashok Tanwar is intensifying with Tanwar not responding to calls from the new Pradesh Congress Committee (PCC) President Kumari Selja.Replying to a query by IANS, Tanwar said he would cooperate with them in the same manner as they had cooperated with him when he was the PCC chief. It certainly not bodes well as the Congress prepares for the Assembly polls, set to be announced anytime soon. When asked what will happen to the Congress, Tanwar said he would work for the party's victory in the elections. Tanwar had faced hurdles from the Hooda camp while he was heading the party. The former Chief Minister didn't support Tanwar and continuously made efforts to get him removed from the post. He only succeeded in September this year, when Congress interim president Sonia Gandhi in an attempt to strike a balance between the two factions named Selja as the PCC chief and Madhusudan Mistry as chairman of the screening committee.According to sources, it was an attempt to foil the Hooda faction's plan to garner tickets for their loyalists. Tanwar also welcomed Mistry appointment. The screening committee comprises Deepa Das Munshi, Devendra Yadav, Ghulam Nabi Azad, Hooda, Selja and Mistry.Haryana Assembly elections could be announced anytime now. The 90-member Assembly has 16 Congress MLAs, most of them Hooda loyalists. At the August 18 Rohtak rally, Hooda had showcased his strength and that majority of MLAs was on his side, sending a strong message to the central party leadership. --IANSmojiz/skp/pcj
Explore more on Newspoint
Loving Newspoint? Download the app now