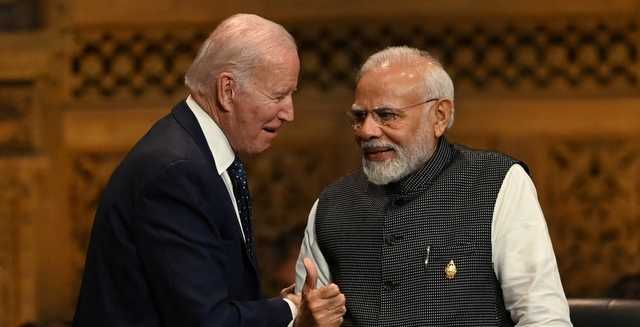 'Not Relevant, Necessary or Contextual': MEA on Reference to PM Modi by US Official

New Delhi: India is upset at a reference to Prime Minister Narendra Modi by a US state department official while defending the immunity it had extended to Saudi Arabian ruler Mohammad bin Salman, who is facing allegations of killing journalist Jamal Khashoggi.

“Frankly, I fail to understand how the comment on Prime Minister Modi was either relevant, necessary or contextual,” external affairs ministry spokesperson Arindam Bagchi said responding to questions about a US official referring to Modi while explaining the reasons for granting immunity to the Saudi ruler.

“Our two countries enjoy a very special relationship which is growing from strength to strength and we look forward to working with the US to further deepen it,” he said, referring to the bilateral ties between India and the US.

A US state department official had on November 18 cited the example of Prime Minister Modi while defending the Joe Biden administration’s decision to grant immunity from a lawsuit to the Saudi Crown Prince over the murder of journalist Jamal Khashoggi.

“Some examples: President Aristide in Haiti in 1993; President Mugabe in Zimbabwe in 2001; Prime Minister Modi in India in 2014; and President Kabila in the DRC in 2018. This is a consistent practice that we have afforded to heads of state, heads of government, and foreign ministers,” US state department’s principal deputy spokesperson Vedant Patel had said.

In 2005, US officials had denied Modi a visa just as he was preparing to travel to New York to address Indian-Americans at a rally scheduled in Madison Square Garden. This decision was taken based on the allegations that as chief minister of Gujarat he had failed to stop riots in the state in 2002.

Then, after he became the prime minister in 2014, Modi secured an immunity from the ban.

Also read: US State Department Cites Immunity Given to Modi While Justifying the Same for MBS

According to the Hindu, Bagchi also spoke about the US Commission on International Religious Freedom (USCIRF) issuing a “country update” that accused the government of “engaging in or tolerating systematic, ongoing, and egregious religious freedom violations”.

“We have seen the biased and inaccurate observations about India by the USCIRF. Their tendency to consistently misrepresent facets shows a lack of understanding of India, its constitutional framework, plurality and robust democratic system,” he said.

The newspaper reported that the “country update”, released on November 22, had included recent incidents and government actions that it called a “crackdown on civil society and dissent”, pointing to the imprisonment and harassment of “journalists, lawyers, rights activists, academics, political leaders, religious minorities, and others critical of its policies”.

It also said that the government’s actions have “eroded the secular principles of the Indian Constitution and India’s pluralistic democracy by promoting and implementing its Hindutva ideology through government policy”, and recommended that the US state department, which periodically releases a list of countries being watched for religious freedom issues, to designate India as a Country of Particular Concern.

Separately, Bagchi also said that reports about the prime minister’s visit to the US in December were “incorrect”.

“No proposal for a visit by the prime minister to the US in December has been made by our side. Media reports in this regard are incorrect,” he said.

He also dismissed social media posts about “false comments” attributed to external affairs minister S. Jaishankar and White House spokesperson with regard to the brief bilateral meeting between Modi and Biden on the sidelines of the recent G20 summit in Bali.

He said the prime minister met Biden on a number of occasions in the course of the Bali Summit, including a brief bilateral meeting and a trilateral meeting that involved Indonesian President Joko Widodo.

“During these interactions, they exchanged views on a number of issues. Our press releases and tweets as well as the foreign secretary’s briefing in Bali encapsulates all these conversations,” he said.

“The US side has also issued its readout of the trilateral meeting and also separately indicated that a brief bilateral meeting did take place between the two leaders,” he said.

(With inputs from PTI)