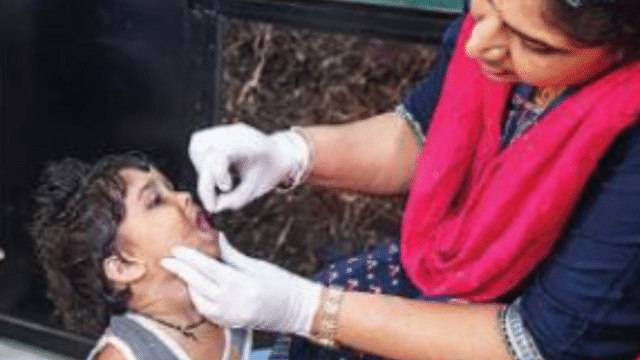 MUMBAI: Nearly 4lakh children in hotspots of 10 measles-hit districts in the state will be administered an additional dose of the measles-rubella (MR) vaccine to tackle the surge in cases.

This is even as the measles death toll in Mumbai Metropolitan Region rose to 14 on Thursday, with another 8-month-old from Govandi succumbing to complications of the disease.

The state government has decided that children from 56 blocks in the state, including Mumbai, which is currently witnessing an increased transmission, will be given the extra shot. Sanjay Khandare, principal secretary (health) told TOIthat the decision was taken following instructions from the Centre to take extra measures. The dose will be only for children between 9 months and 5 years living in pockets seeingan outbreak, irrespective of vaccination status. In Mumbai, the additional dose will likely be given in selected wards reporting measles cases , not the entire city.

Acall on administering children younger than 9 months an early dose will be taken on Friday. Khandare said giving a zero dose to infants between 6 months to 9months is being discussed. “We may give that in more severe areas, but a final call will be taken on Friday after consultation with more experts,” he said.


The first dose of the measles vaccine is administered at 9 months, but an exception may be made for the first time in decades to give it before the stipulated age. The decision to vaccinate infants below 9 months has been prompted by 9% infections and three deaths in the category.

The 8-month-old boy from Govandi who died on Thursday went into multiorgan dysfunction syndrome with bronchopneumonia with measles, the BMC official said. As per medical records, the child was admitted to a civic facility with a fever, cold, maculopapular rash and decreased respiratory activity. As his condition worsened,he was moved to Kasturba Hospital and put on a ventilator to maintain oxygen saturation.

The patient succumbed on Thursday at 1. 10 pm despite doctors trying resuscitative measures. A doctor said that the child had nutritional deficiencies and was unvaccinated because he was younger than 9 months.

Currently, 97 children are in hospital with measles, of which two are on oxygen support. The 22 outbreaks in the city are now spread across 11 wards. Of eight confirmed deaths in Mumbai, seven are from M east ward. The count of suspected cases has risen to 3,695 and confirmed to 252.

Dr Mangala Gomare, BMC’s executive health officer, said they would administer additional doses as per instructions from the state and Centre. However, there is no further vaccination recommendation for people outside outbreak areas yet, she said.