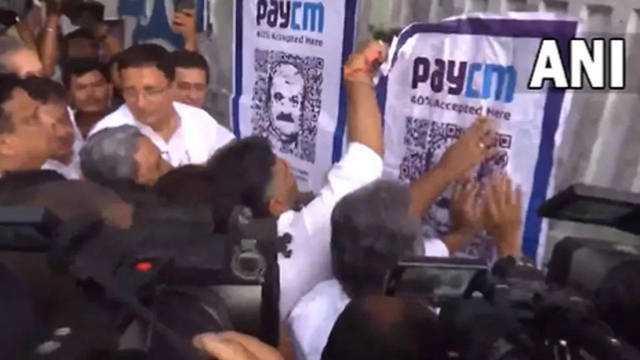 NEW DELHI: Congress leaders, including DK Shivakumar, Siddaramaiah and Randeep Singh Surjewala, were detained on Friday in connection with the 'PayCM' posters against CM Basavaraj Bommai in Karnataka.

"The 'PayCM' poster protest will continue in the entire state. This is a campaign by the Congress party against this "40% corruption government"," leader of opposition Siddaramaiah said after being detained.


A poster war erupted between BJP and Congress after pictures of Bommai's face on a QR code titled 'PayCM' -in a near-replica of PayTM logo - surfaced on compound walls, transformers and bus shelters at some places in Bengaluru.

Soon after the matter came to the notice of the authorities, these posters were removed and a case was booked under the Karnataka Open Places (Prevention of Disfigurement) Act 1981. Bengaluru police commissioner CH Pratap Reddy said they have registered cases against unknown persons and launched investigations into the incident.

The PayCM QR code bearing the photograph of the chief minister gets directed to a website - '40% Sarkara' - accusing the Bommai-led BJP government was charging 40 per cent commission on public works.

The website was launched a few days ago by the Congress.

Bommai called the campaign "a systematic ploy" to tarnish his and Karnataka's image. "It is a pseudo-campaign," he added.

The alleged redo (remodified) denotification scam occurred between 2013 and 2018 when Siddaramaiah was CM after he allegedly denotified 600 acres. Shivakumar is under investigation by the Enforcement Directorate in two money-laundering cases.