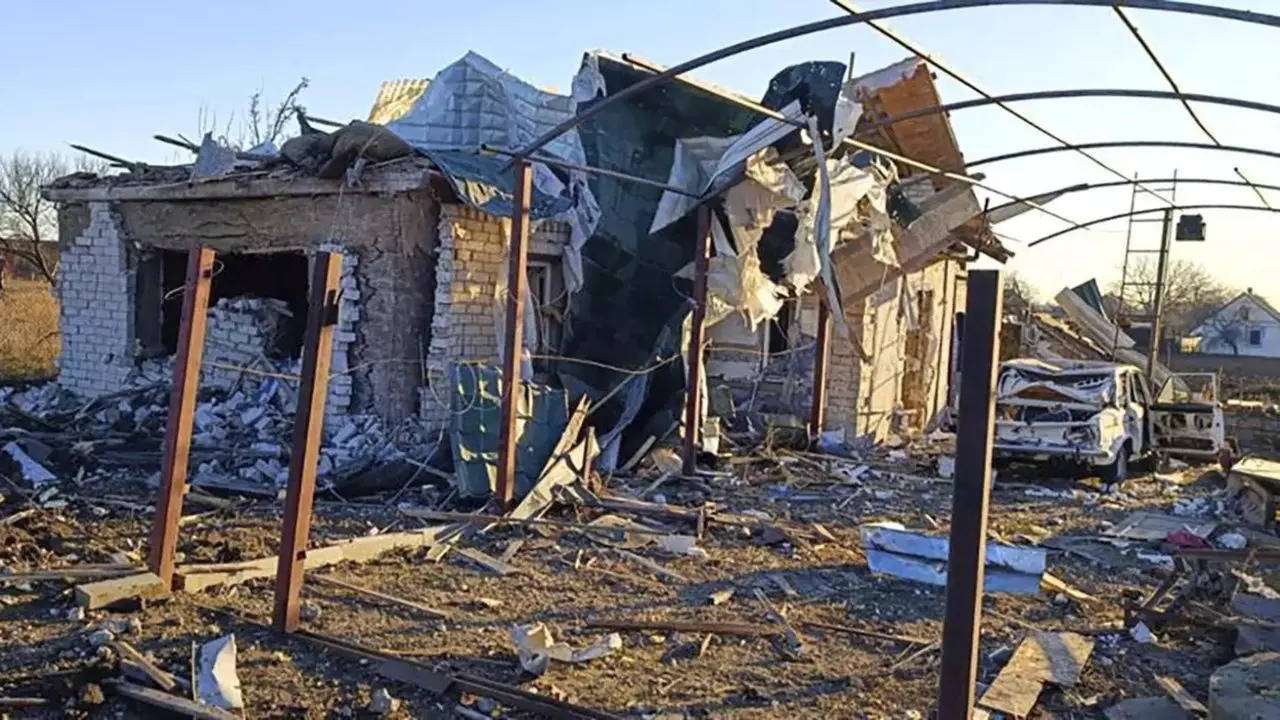 Russia unleashes missiles but Ukraine says most shot down

KYIV: Russia on Monday unleashed what Ukrainian authorities called the latest "massive missile attack" across their country, striking homes and buildings, killing civilians, and disrupting electrical power and water supplies in areas - notably in the Black Sea port city of Odesa. Ukraine 's air force claimed it shot down more than 60 of the 70 missiles fired.


Russia has fired another barrage of missiles at our critical civilian infrastructure trying to deprive people of power, water, and heating amid freezing temperatures. The more war crimes Russia commits, the more weapons should be provided to Ukraine to end Russian terror sooner.


Russian President Vladimir Putin , meanwhile, drove a car across a bridge linking his country to the Crimean Peninsula following its repair from a truck bombing in October that had embarrassed Moscow.

Russia responded to the bridge attack by firing waves of missiles at Ukrainian infrastructure targets in the weeks that followed, and Monday's onslaught was just the latest round of retaliatory strikes. Russia is seeking to disable Ukraine's energy supplies and infrastructure as winter approaches - part of a new strategy in its nine-month war.

The onslaught of attacks also came hours after Russian media reported two explosions at air bases inside Russia, although neither Moscow nor Kyiv immediately commented on the possible cause of the blasts.

Defiant as ever, Ukrainian President Volodymyr Zelenskyy praised his military forces and the technicians who snapped into action to repair the damage.

"Air defense shot down most of the missiles," he said in brief comments on social media. "Power engineers have already started to restore electricity. Our people never give up."

Ukraine's air force said early indications showed Russian forces fired 38 cruise missiles from carriers in the Caspian Sea and from the southern Russian region of Rostov. Another 22 Kalibr cruise missiles were fired from its Black Sea fleet, and kong-range bombers, fighter jets and guided missiles were also involved, it said.

"In total, more than 60 invaders' missiles were shot down!" the air force said on its Telegram channel.

Ukraine's electricity provider, Ukrenergo, lashed out at Russia over "the eighth massive missile attack by a terrorist country," saying its facilities had been hit, triggering blackouts. It urged residents to stay in shelters as its crews tried to repair the damage.

In the capital of Kyiv, scores of people quickly filled the central Zoloti Vorota metro station after the warnings, and many checked their phones for updates. There were no immediate signs of whether the city or the surrounding region was hit.

Air raid sirens sounded across the country. Ukrainian media reported explosions in several parts of the country south of Kyiv, including Cherkasy, Kryvyi Rih and Odesa. Officials said water, electricity and central heating was cut to many parts of Odesa.

"The enemy is again attacking the territory of Ukraine with missiles!" Kyrylo Tymoshenko , the deputy head of the Ukrainian president's office, wrote on Telegram.

Tymoshenko said two people were killed and three others injured - including a 22-month-old child - in the village of Novosofiyivka in the southern Zaporizhzhya region.

In neighboring Moldova, the Interior Ministry said on its Facebook page that border patrol officers had found a rocket in an orchard near the northern city of Briceni near Ukraine.

Emergency services, including a bomb squad. were sent to the scene. Controls in the vicinity have also been tightened, the ministry said. It was not immediately clear when the rocket may have landed or who fired it.

Moldovan Prime Minister Natalia Gavrilita stopped short of saying when the missile might have fallen but cautioned that "a new wave of missile attacks is taking place in Ukraine, which has direct consequences for our country." She warned that Moldova could suffer further power outages in the new Russian strikes.

Earlier Monday, Russian media reported an explosion at a base in Ryazan, in western Russia. The RIA Novosti news agency said three servicemen were killed and six were injured and a plane damaged when a fuel truck exploded.

Separately, authorities in the Saratov region along the Volga River said they were checking reports about an explosion in the area of the Engels air base, which houses Tu-95 and Tu-160 strategic bombers capable of carrying nuclear weapons.

Saratov regional Gov. Roman Busargin said there was no damage to civilian facilities.

Regional media reported sounds of a powerful explosion near the Engels base, and some residents were quoted as saying they saw a flash of light coming from the area.

Asked whether Putin had been briefed on the Engels base explosion, Kremlin spokesman Dmitry Peskov said simply the president was regularly informed of ongoing developments.

Putin's drive across the bridge over the Kerch Strait was an important sign that Russia was able to recover from setbacks and repair the span quickly after the Oct. 8 truck bomb that severed a key link from Crimea to the mainland. He also spoke to workers and discussed the repairs with a senior government official responsible for the project.

Putin had inaugurated the bridge in a highly symbolic move after the annexation of Crimea in 2014.

Zelenskyy's office said three rocket strikes hit his hometown of Kryvyi Rih in south-central Ukraine, killing a factory worker and injuring three others. In the northeastern region of Kharkiv, a person was killed in strikes by S-300 missiles on civilian infrastructure in the town of Kupyansk, it said.

The war that began with Russia's invasion of Ukraine on Feb. 24 has displaced millions from their homes, killed and injured tens of thousands of people and shaken the world economy - notably through the fallout on the prices and availability of food, fertilizer and fuel that are key exports from Ukraine and Russia.

Western countries Monday imposed a $60-per-barrel price cap and a ban on some types of Russian oil, part of new measures aimed at stepping up pressure on Moscow over the war.

The move has prompted a rejection from the Kremlin and also criticism from Zelenskyy - whose government wants the cap to be half as high.

Russian Deputy Prime Minister Alexander Novak, who is in charge of energy issues, warned in televised comments Sunday that Russia won't sell its oil to countries that try to apply the price cap.

"We will only sell oil and oil products to the countries that will work with us on market terms, even if we have to reduce output to some extent," Novak said hours before the price cap took effect.

Russia, the world's No. 2 oil producer, relies on oil and gas to underpin its economy, which has already come under sweeping international sanctions over the war.

In recent weeks, Russia has been pounding Ukrainian infrastructure - including power plants - with military strikes and keeping an offensive going in the east, notably in and around the town of Bakhmut.

Russian forces have also been digging in near the southern city of Kherson, which was recaptured by Ukrainian forces last month after an 8-month occupation.