Dubai Then And Now: See The History Of Dubai By Flipping These Pictures

Tucked over the southeast coast of the Persian Gulf, Dubai happens to be the most populous city in the UAE. Once a mere fishing village of not more than 800 people, Dubai has over time emerged as a global metropolitan and a major business hub of the Middle East. Wondering how it changed on such a massive scale? Well, we’ve put together some intriguing pictures to help you witness and compare the old Dubai vs the new one. So, scroll down and take a peek at the intriguing history of Dubai!

A Brief History Of Dubai

Way back in 1833, Dubai had started off as a small settlement by some 800 members of the Bani Yas tribe, who were attracted to the natural harbour created by the creek flowing through Dubai. They turned the area into a small center for fishing and pearling. These people were later joined by the Arabian nomads of the Middle East called Bedouins. They too settled near the creek in small houses known as barastis.

During the 1960s, Dubai’s economy was merely dependent on the revenues generated from trade and oil exploration concessions. The history of Dubai development shows that when a major chunk of revenue obtained from oil reserves started to flow in 1969, Dubai started developing rapidly. Vast sums of cash were thrown into the picture, and major infrastructure like schools and hospitals started developing swiftly. Over the years, it transformed Dubai into the glam and glitzy hub we know today.

Dubai Then And Now: Flip To See

Flip the following images to see what Dubai looked like decades ago and how massively it has transformed over the years. 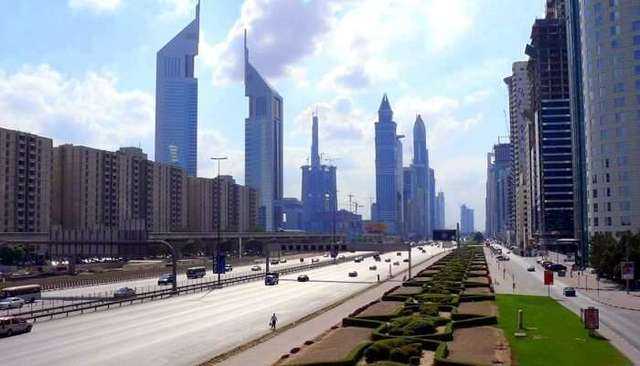 The primary highway linking Dubai and Abu Dhabi, Sheikh Zayed Road is the longest road in the Emirates. The construction of this massive road had begun back in 1971, and it took over nine long years to complete it. Known as the Defence Road back in those days, this road network is now bounded by various important buildings and areas of Dubai, including the Emirates Towers, Palm Jumeirah, and Dubai Marina.

Must Read: Things To Buy In Dubai That Excite The Shopaholic In You And Make For Cute Souvenirs 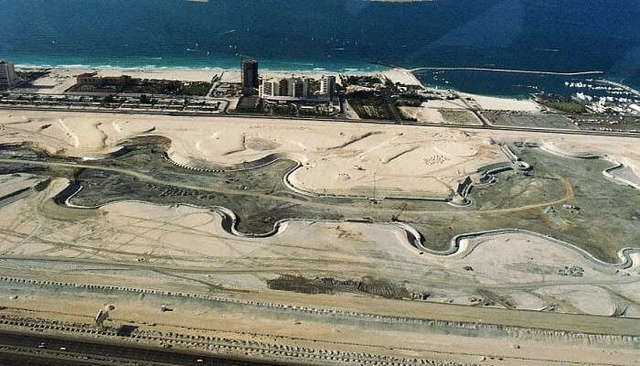 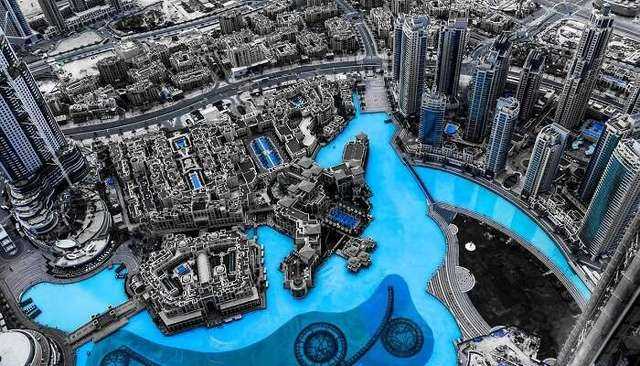 Dubai Marina is an artificial canal city located on a 3 km stretch of the Persian Gulf shoreline. It was constructed by bringing in water from the gulf into the designated site of Dubai Marina and creating a man-made waterfront. It houses various iconic structures like the Jumeirah Beach Residence and Masjid Al Rahim mosque. Claiming to be the world’s largest man-made marina, Dubai Marina has helped a great deal in shaping the history of Dubai.

Suggested Read: 10 Most Popular Adventure Sports In Dubai For A Thrilling UAE Holiday In 2021 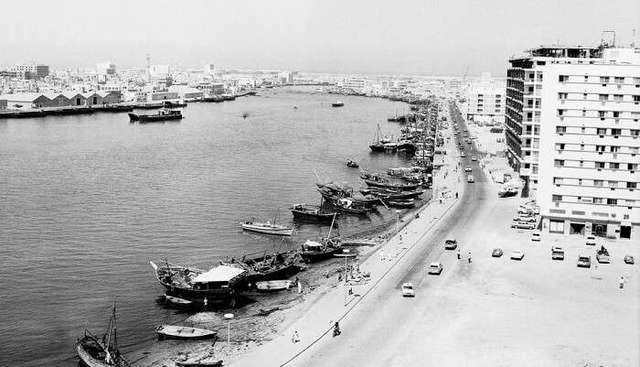 This handsome addition to the landscapes of Dubai was expected to be the biggest waterfront and man-made establishment in the world. The Dubai Waterfront project is essentially an amalgamation of canals as well as an artificial archipelago. The construction of this 8-kilometer long waterfront that runs parallel to the Persian coastline had begun back in February 2007, but had to suspended midway owing to the financial crisis that hit Dubai during that time. Undoubtedly, this waterfront paints a vivid picture of Dubai’s history.

Suggested Read: Dubai In September: An Ultimate Handbook To Answer Your Questions Instantly! 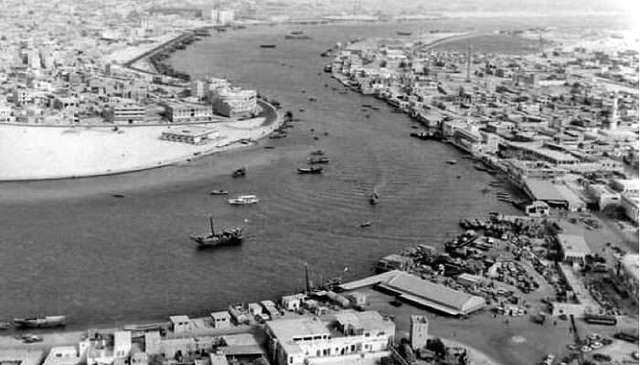 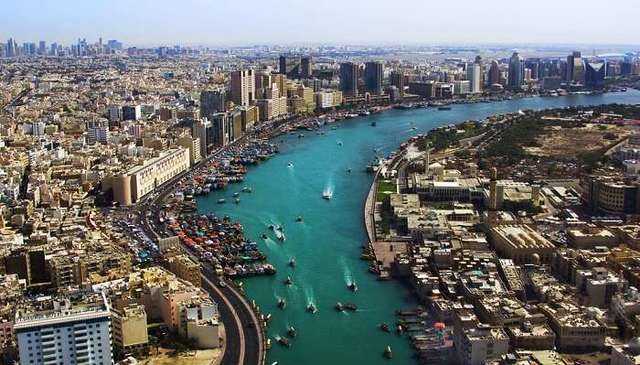 Dividing the city into its two major sections – Deira and Bur Dubai, the Dubai Creek serves as a major part of the history of Dubai. It was the first element that drew the Bani Yas tribe, the first ever inhabitants of Dubai, to settle down here. They had built their civilization near the Bur Dubai creek area in the 19th century, giving rise to the Al Maktoum dynasty in the city.

Suggested Read: Food Festival In Dubai: An Ultimate Event Where You Can Just Eat, Crave & Repeat 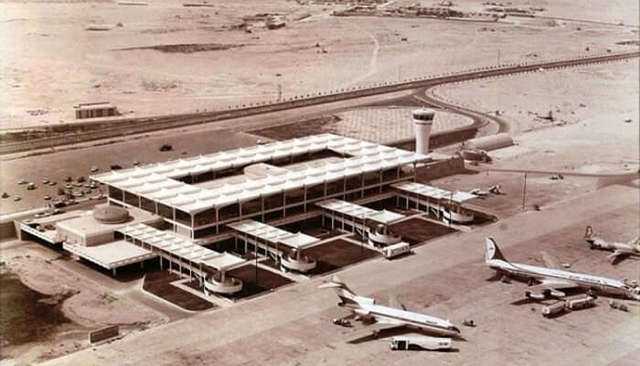 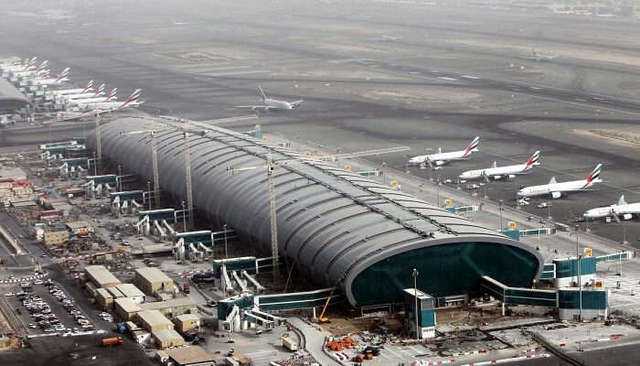 The Dubai Airport was built in 1959 on the direction of the then ruler Sheikh Rashid bin Saeed al Maktoum. Back then it had a mere 1,800 meter runway built out of compacted sand. According to the history of Dubai, an asphalt runway and a fire station were added to the airport premises later. Today, it is one of the busiest airports in the world.

Suggested Read: Burj Khalifa: The Tallest Building In The World 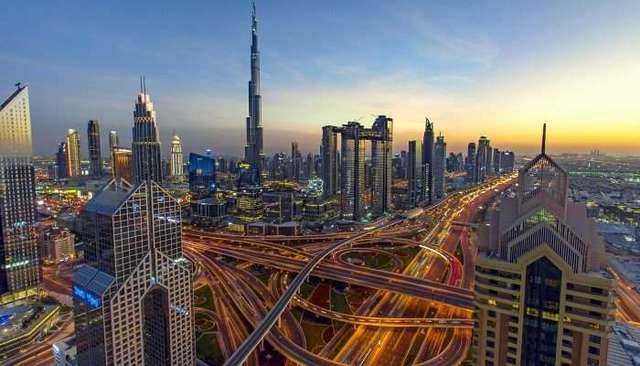 In the year 2006, about a quarter of the cranes in the world were occupied in building the massive structures we see in Dubai today. The history of Dubai tourism shows that more and more tourists started pouring into the city once these towering and glistening buildings were up and running. And once the Burj Khalifa joined the party, Dubai shot to fame as being the home of the tallest man-made structure in the world, bringing in a huge influx of travelers from all over the world to see this massive beauty.

Suggested Read: Top 5 Bridges In Dubai That Will Connect You To The City Like Never Before 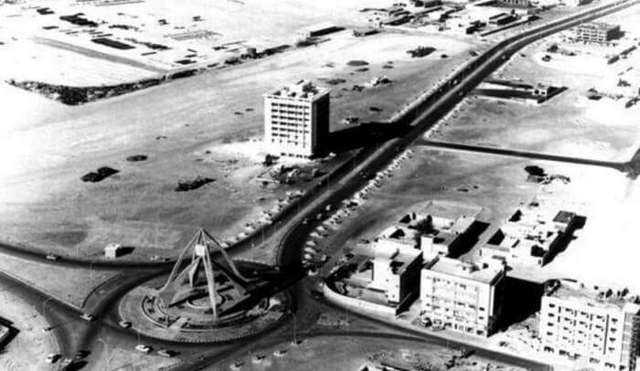 Dubai’s famous Clock Tower is situated right in the middle of Deira and it was built back in the year 1963. This impressive structure stands at the very gateway of Maktoum Bridge that in turn serves as an essential link between Bur Dubai and Deira. While it may have been surrounded merely by sand and undeveloped structures at that time, this area has now transformed into one of the most happening hubs of Dubai where youngsters like to hang out. Hands down, this clock tower certainly offers a glimpse into Dubai’s history.

Suggested Read: 22 Free Things To Do In Dubai And Experience Over The Top Luxury Without Spending A Penny 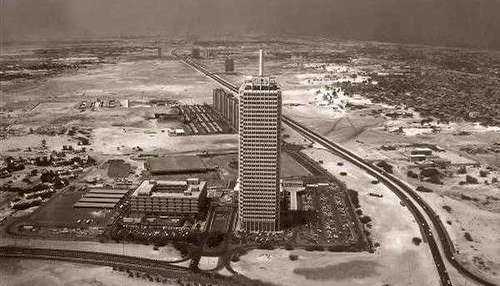 The construction on Dubai’s World Trade Center had begun in 1977, and it was a lone structure in this entire area at that time. This 39-storey building was known as the Sheikh Rashid Tower back in those days and played a crucial role in shaping the economic history of Dubai.

Suggested Read: 8 Bakeries In Dubai For Your Sinful Indulgence In Sugar And All Your Sweet Cravings 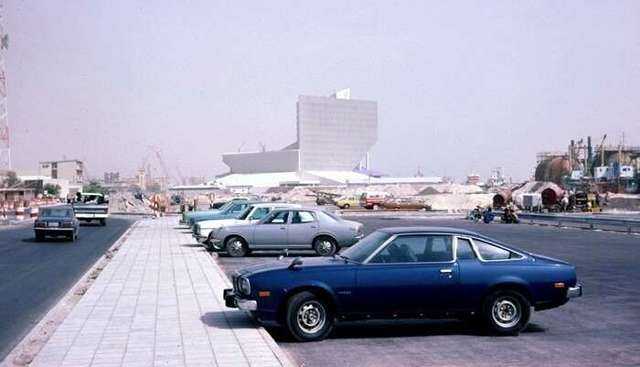 After the government of Dubai decided to convert the city into an attractive tourist destination, a number of hotels hotels started cropping up here. The Sheraton Dubai Creek Hotel & Towers was one of the first hotels to be built in Dubai, and that is the reason it still remains as a reputed and immensely popular place to stay in Dubai.

Suggested Read: The World Islands: A Detailed Guide For 2021 To This Man-made Marvel In Dubai 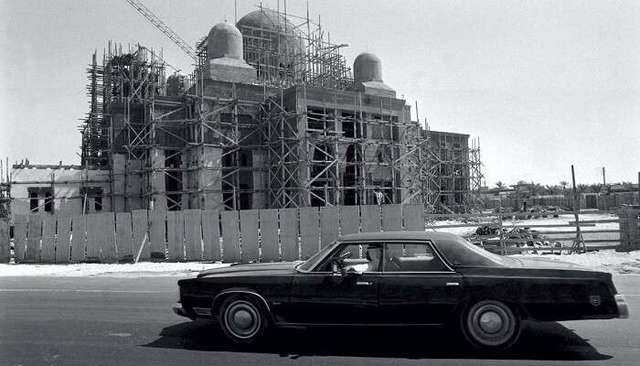 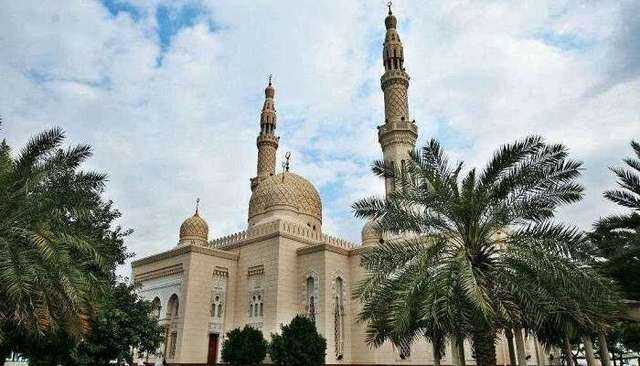 The construction of the famed Jumeirah Mosque had not begun until 1976, and its completion took over three years. This stunning mosque has been built in the traditional Fatimid style that initially originated in Syria and Egypt. The mosque finally opened it gates in 1979 and has been a key tourist attraction in the city since.

Suggested Read: Dubai In October Is All About Traversing New Places & Indulging In Activities! 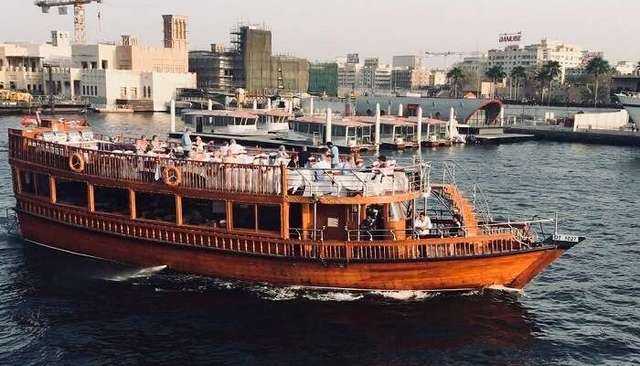 While initially the use of the Dhow boats was limited to extracting fish from the creek, it now serves drives a large share of tourism in the city. Providing entertainment and leisure activities to tourists, cruising on these boats is among the most favorite activities of travelers coming into the city.

Further Read: 53 Tourist Places In Dubai: Do Not Come Back Without Visiting These Marvels In 2021

Hasn’t this comparison of Dubai then and now blown your mind? We bet you had never looked at the history of Dubai this way. Now all that is left for you to do is to take a kickass vacation in Dubai with your near and dear ones. But before that, don’t forget to share this with your friends.

Disclaimer: TravelTriangle claims no credit for images featured on our blog site unless otherwise noted. All visual content is copyrighted to its respectful owners. We try to link back to original sources whenever possible. If you own the rights to any of the images and do not wish them to appear on TravelTriangle, please contact us and they will be promptly removed. We believe in providing proper attribution to the original author, artist, or photographer.

Please Note: Any information published by TravelTriangle in any form of content is not intended to be a substitute for any kind of medical advice, and one must not take any action before consulting a professional medical expert of their own choice.

Who were the native tribes of Dubai?

What role has oil played in the economy of Dubai?

From the very beginning of the social life in Dubai, oil refinery and researches have proved to be an essential component in enhancing the economy of Dubai.

Which is the main highway in Dubai?

Abu Dhabi, Sheikh Zayed Road is the most important highway in Dubai. It connects Dubai to Abu Dhabi. The construction started in 1971. This highway is also known as the Defense Road.

What is Dubai Marina?

Dubai Marina is the world's largest man-made canal city located on a 3 km stretch of the shoreline of the Persian Gulf. It was built by bringing water from the gulf into the site. It has several iconic structures like the Jumeirah Beach Residence and Masjid Al Rahim mosque.

How is Bur Dubai Creek an important part of Dubai?

The Bur Dubai Creek is the creek that divides the city of Dubai into two parts. It has a significant role in shaping the history of Dubai. It was around this great creek that the first civilization was built.

Which is the best airport in Dubai?

The Dubai Airport that was made in the year 1959 is the best and the most important airport in Dubai. An asphalt runway and a fire station were later added to the airport.

What are the famous towers in Dubai?

Dubai is the largest city in the UAE. In this city, you can see several skyscrapers and towers which are famous all over the world. Some of the popular towers of Dubai are Burj Khalifa, Burj AI Arab Jumeirah, Cayan Tower, and Almas Tower.

What is the best tourist attraction in Dubai?

There are a number of places to visit in Dubai with family. Some of the best attractions of Dubai are Burj Khalifa, Dubai Mall, Dubai Museum, Bastakia (Old Dubai), and Jumeirah Mosque.

The post Dubai Then And Now: See The History Of Dubai By Flipping These Pictures appeared first on .