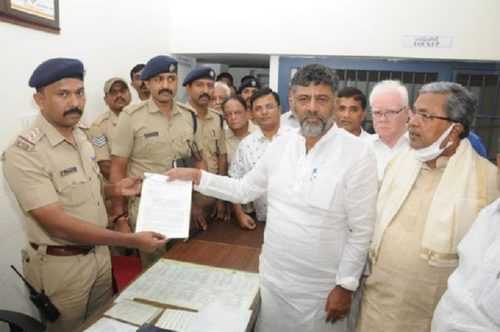 Karnataka Congress chief D.K. Shivakumar has stated that the complaint has been submitted to file an FIR against BJP leaders and take up the investigation. “It is an attempt to influence the result of elections by defeating the objectives of democracy,” he said.

The complaint has been filed with High Grounds police station in Bengaluru. Shivakumar, Opposition leader Siddaramaiah-led delegation submitted the complaint.

Former Minister and BJP MLA Ramesh Jarkiholi announced at a public rally on Tuesday that the opposition party candidates are distributing gifts worth a thousand and they will also give it in future. The total worth would not cross Rs 3,000.

“The voters can cast their votes after getting Rs 6,000 per each vote,” he said.

Siddaramaiah had alleged that ruling BJP is all set to spend Rs 30,000 crore to come to power.

“The BJP is convinced that it will be defeated in elections. The party leaders have amassed huge money through corruption. The BJP does not have trust in a judicious, rightful election process,” he added.