Govardhan 2019- The Story Behind Govardhan Puja

Govardhan Puja commemorates the incident when Lord Krishna lifted the Govardhan Hill to provide shelter to the villagers of Vrindavan from torrential rains. As per the scriptures, the folks of Vrindavan used to offer lavish meals to the God of rain and storm, Lord Indra to ensure that he blesses them with proper rainfall and good harvest. But Child Krishna found the practice to be too harsh for the small-time farmers, and he convinced them to discontinue making these offerings to Lord Indra and instead feed their families. This enraged Lord Indra, who sent down rain and thunderstorm out of anger in Vrindawan. The rains continued for days.

The village folk were afraid and they approached Krishna for help who then asked everyone to proceed to the Govardhan hill. When they arrived, Lord Krishna lifted the entire hill with his little finger, people trickled under the hill to take shelter from the storm. 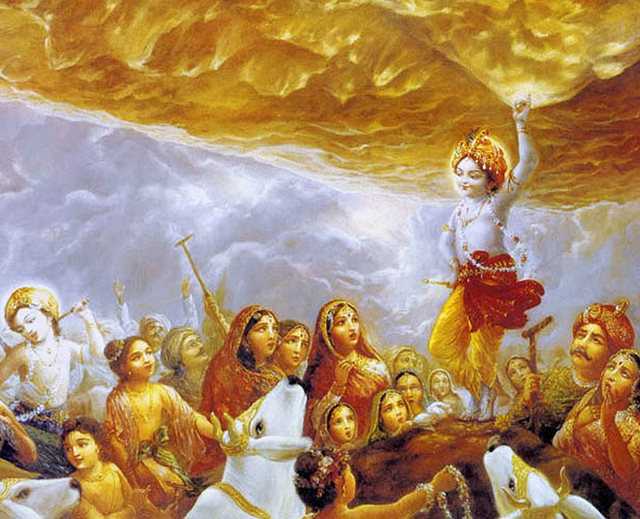 Krishna was there for seven days, held the mountain for 7 days on his little finger. Finally, Indra had to bow to the might of Krishna and stop the rains. After this episode, women of Vrindavan cooked 56 dishes for Krishna. It is believed that Krishna took 8 meals in a day. As he had stood there for seven days without any food, the women decided to make up for it with a lavish Chappan bhog (a meal consisting 56 items like halwa, ladoos, mishri and peda).

Thus, it came out that God will protect all devotees who take full refuge in him. So, devotees offer a mountain of food, metaphorically representing the Govardhan Hill, to God as a ritual remembrance and to renew their faith in taking refuge in God.