Fatehabad, Haryana: In the Fatehabad assembly segment under Sirsa Lok Sabha constituency, there is a new issue being talked about in political parties’ election campaigns: Growing drug abuse and its impact on the youth. With a rising number of youngsters dying due to overdose and an increase in HIV cases, opposition parties are raising this topic to attack the Manohar Lal Khattar government.

At the office of Congress candidate Prahlad Singh Gillankhera, the party’s media in-charge Ravi Karwasa said the problem of “chitta” (a local name for white smack powder) grew in the state after Amarinder Singh became the chief minister in Punjab in February 2017. “When the Punjab government went after drug dealers, many of them crossed into Haryana. Fatehabad, which shares a long border with Punjab, is among the worst hit,” he says.

He said recently, a girl was found dead in a godown while a couple was found dead in an abandoned building. They had all consumed drugs. He said in every village of the district, cases of drug addiction are being reported and nearly a dozen people have already lost their lives. “Yet the government has not acted sternly against drug traffickers.”

With chitta available for Rs 3,000 per gram, many youngsters have apparently got hooked. Karwasa claimed that drug abuse has resulted in a spike in HIV cases. He said over 1,000 cases have been reported in the region recently. “The problem has reached such proportions that some community centres, which were lying in a state of disuse, have now been occupied by drug dealers and addicts,” he charged.

Karwasa said to highlight the problem of drug abuse, a member of social activist Anna Hazare’s team had also organised a protest fast in the city.

Gillankhera, who was an elected director in the government-run Iffco fertiliser company, is also campaigning on the issue of high vegetable prices and the closure of nearly 900 schools. He has also targeted the Khattar government for not carrying forward the work of expanding a 100-bed hospital to 200 beds and the lack of staff in other hospitals, apart from the removal of contractual staff. 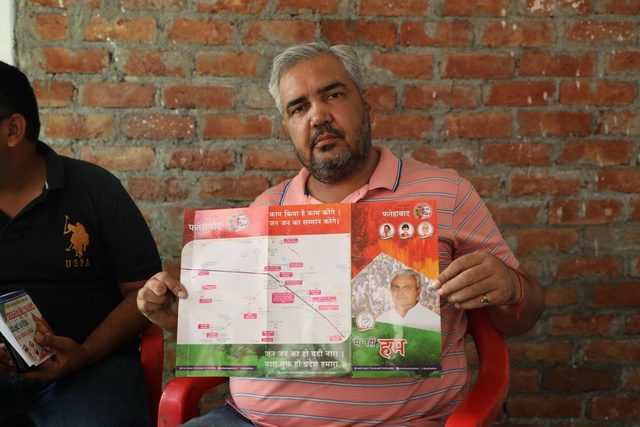 The fight for the constituency, in which about 27,000 followers of the Dera Sacha Sauda also reside, is quite interesting. A game of musical chairs has begun, with several leaders changing their colours.

Gillankhera, the Congress candidate, won the seat in 2009 as an independent, defeating Dura Ram of the Congress.

After his defeat, Dura Ram defected to his uncle, Bhajan Lal’s party, the Haryana Janhit Congress. He contested as its candidate in 2014, but came behind Balwan Singh Daulatpuria of the Indian National Lok Dal (INLD).

This time, the INLD has fielded Suman Siwach. Dura Ram, who polled 57,034 votes in the last election, has meanwhile been fielded by the BJP. This annoyed another party leader, Virender Siwach, who went and joined the JJP and became its candidate. Siwach was with the RSS for the past six years.

However, the BJP is not reading much into his move. Dura Ram’s brother and advocate Dwarka Prasad, who is managing his election arrangement, said the saffron party decided to field his brother only after getting a survey done in the region.

On the issue of growing drug addiction, he said, “Some of our areas adjoin Punjab [from where drugs are arriving]. After the elections, we will work with the government to put a complete stop to this menace.”

Another lawyer and BJP activist, Bharat Bhushan, said the main issue for the BJP is the dilution of Article 370 and the performance of the Khattar government. He said the party has also assured it would work for the welfare of all communities. On the issue of the Dera’s influence in the election, he said everything [the conviction of Ram Rahim Singh] happened on court orders and that the BJP “had no role in it”.