Not Paatal Lok, 'bhajan samraat' Anup Jalota made his acting debut with THIS film

'Bhajan Samrat' Anup Jalota became the talk of the town when he became a part of the reality show Bigg Boss 12 in which he participated with his 'girlfriend' Jasleen Matharu. However, after getting evicted he revealed that their relationship was not more than that of a 'guru-shishya.' Yet again the proficient bhajan singer came into the limelight and this time because of his acting-stint in Anusha Sharma produced Amazon Prime series, Paatal Lok. The singer in the much-talked-about series played a short but crucial role of that of a politician named Balkishan Bajpayee, whose importance in the tale gets revealed in the end. But if you are one of those who thinks this was his acting debut, then you are probably wrong!

Talking about his acting experience in Paatal Lok, Anup told iwmbuzz.com, "It’s never too late to take up a new challenge. And this was an easy one. Playing the Dalit political leader was not difficult at all. After all, I had been on Bigg Boss which is the toughest role to perform for any actor. It was called Jamuna Paar and I was asked to play a politician. The offer came from Anushka Sharma’s office. They informed me that I’d have to shoot for eight days in Chitrakoot and then a couple of days in Mumbai. They said I had the correct look for it. I agreed without a second thought."

ALSO READ: Remember Indian girls Parvati and Padma from Harry Potter? Here's how they were selected for the film

After the series came out, many talked about his acting debut but it seems that Paatal Lok is not the first project in which he has worked. IMDB states that he first acted in a devotional film called Sampoorna Sant Darshanam released in the year 1978 but played a small role. 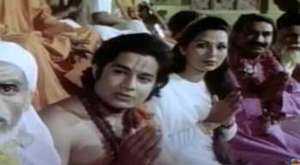 He has even done some religious films like 988 film Chintamani Surdas, where he had a guest appearance, playing the role of Tansen. The below-listed song was supposed to be in another film but since it never got made, the makers used it in Chintamani Surdas. Have a look:

Furthermore, he has played the lead role in a Bangla film 'Bhranta Pathik.' In the year 2011, he composed the soundtrack for the film, Malik Ek, in which he appeared as Das Ganu.

In 2100, he played the role of a female lead's father in the movie Tere Mere Phere.

ALSO READ: Fans ask Diljit Dosanjh if he's in India, US or Canada after his kitchen in cooking videos looks different

But looking at his role in Paatal Lok, it is definitely a radical change! Have a look at the trailer of Paatal Lok here: