More than a million protesters crammed into the streets of central London to fight for a second EU referendum as Boris Johnson suffered another humiliating defeat, say organisers.

Aerial footage showed extraordinary scenes as throngs of people marched from Park Lane to Parliament Square in Westminster amid a historic showdown in the House of Commons.

Britons calling for a "final say" vote on the Prime Minister's new Brexit deal were joined by celebrities such as Star Trek actor Sir Patrick Stewart and opposition politicians in one of the biggest protests ever seen in the capital.

Cheers erupted from the massive crowd outside Parliament as MPs passed the Letwin amendment in a 322-306 vote, delaying the approval of the deal and forcing Mr Johnson to seek a delay.

"Demonic Cummings" was written across the forehead of the figure which appeared to be wearing a Nazi uniform, including an armband reading "Get Brexit Done", and had a Union Jack moustache.

As protesters waved signs, banners and EU and UK flags, Sir Patrick praised the crowd for keeping the fight for a second EU referendum alive. 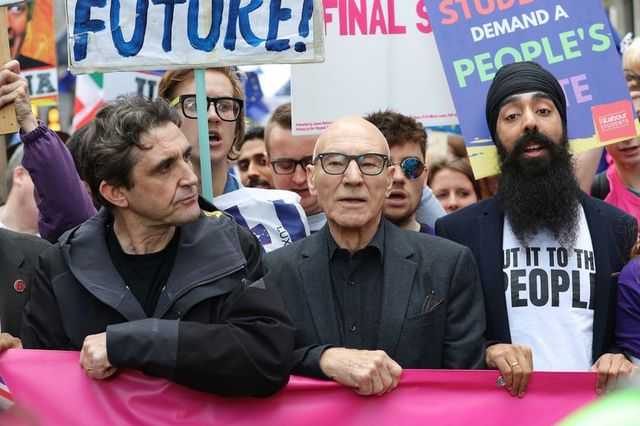 He said the crowd has proven a second referendum was not the "pipe dream" that opponents have described it as.

Sir Patrick added there was "nothing democratic" about the 2016 referendum. 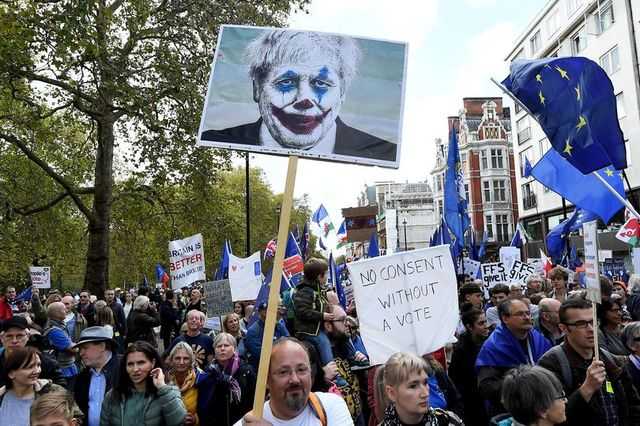 Effigies of the Prime Minister have been held aloft by protesters at the demonstration, with some accompanied by their pets draped in EU flags, on the People's Vote march to Westminster.

A number of celebrities and politicians joined the march, with London Mayor Sadiq Khan pictured alongside Sir Patrick and actor Stephen McGann at the front of the crowd as the march set off from Park Lane on Saturday afternoon. Television chef Rick Stein shared an image of himself at the march, declaring "We are European", while Observer food critic Jay Rayner tweeted from the protest: "We march because we have to."

Protesters made their way through central London to Parliament Square, where Great British Bake Off presenter Sandi Toksvig and opposition MPs, including Labour's Jess Phillips and Liberal Democrat Luciana Berger, addressed the crowds.

The float depicting No10 aide Mr Cummings was being manned by Phil Jeanes, 67, who said he had driven the sculpture from Dusseldorf in Germany on Thursday night. 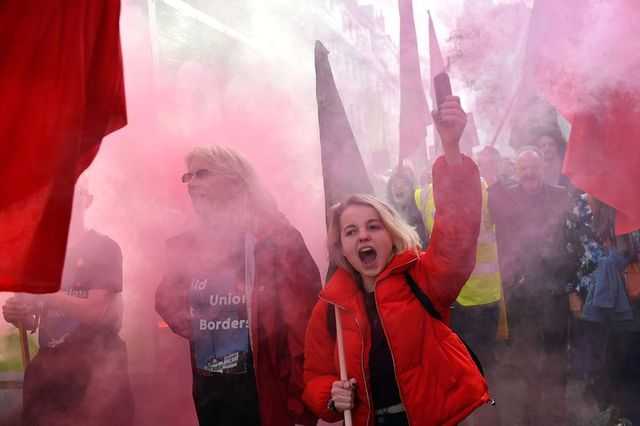 Mr Jeanes is part of a group called EU Flag Mafia, and has lived in Essen for the last nine years with his German wife.

He said the float had been specifically designed for the People's Vote march by the German artist Jacques Tilly.

It is the fourth model designed by the artist, who also made a sculpture of Theresa May with her nose impaling a man in a bowler hat. 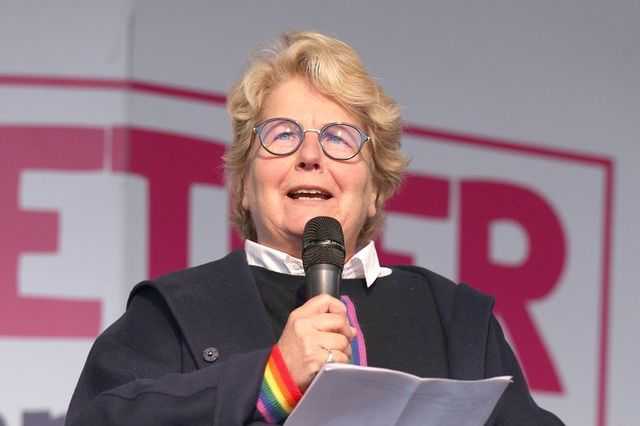 "He put 14 sketches together and we chose what we thought would be the best," Mr Jeanes, who is retired, said.

"I suppose we were always intending to do a float for this march and you have to wait and see what is happening at the time."

Jason Hurt, 48, from Sheffield, was sporting a "I voted Leave" T-shirt, and said he feels people who voted for Brexit are being ignored.

"I voted Leave, I want my voice heard," he said.

"It is always about the Remainers, never about the Leavers. There are 17.4 million of us, we never get our voices heard."

Pam Julian, from Bermondsey, south-east London, held a sign which read: "Screw EU, we want our country back" - but said she has nothing against Europe.

The 68-year-old said Brexit is about regaining her independence.

"It is not just about trade or what Boris is saying. The main thing is to regain our independence, to be able to self-govern," she said.