Expressing optimism that the Supreme Court will give a verdict in their favour, the MLAs disqualified by former Speaker Ramesh Kumar in July this year will jointly decide their next course of action after the apex court ruling.

Speaking to reporters in Mysuru on Monday, one of the disqualified MLAs, B.C. Patil, said all 17 former legislators who resigned in protest against the functioning of the H.D. Kumaraswamy-led coalition government were united. “All of us will be together. We will take a joint decision on our future course of action,” Patil said.

The former MLAs have filed a petition in the Supreme Court questioning their disqualification by the former Speaker K.R. Ramesh Kumar.

Bengaluru man Sets Himself and Family on Fire, Wife who is Lone Survivor Critical Photo of the crime scene.

A 21-year-old woman, her 13-year-old brother and their mother were allegedly set on fire by their father on Monday morning. At around 9.45 am on Monday, residents of Bakshi Garden noticed flames engulfing their neighbour’s home. Scared that the fire would spread to their homes, the residents alerted the Fire and Emergency Services personnel, who arrived at the spot to combat the flames.

The firefighters, who doused the flames in minutes, retrieved the bodies of 21-year-old Kaveri and her 13-year-old brother Srikanth. Their father, Murali (45) and mother Geeta (38) had sustained severe burn injuries and shifted to Victoria Hospital. Murali, who had sustained 70% burns, succumbed to his injuries at Victoria Hospital. Geeta, meanwhile, has sustained 60% burns and is currently undergoing treatment at the same hospital. 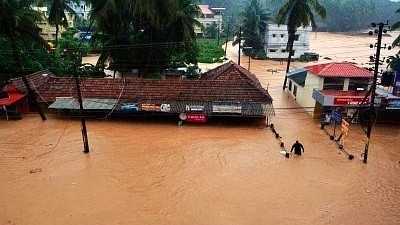 File photo of flooded roads of Mangaluru after heavy rains as monsoon entered early to the Karnataka on 29 May, 2018.

Heavy rains continued to lash parts of north-Karnataka on Monday, damaging road networks, bridges and other key infrastructure throwing life out of gear for the population that is yet to recover from the downpour and floods in August.

Videos of motorists driving through inundated streets, damaged homes and persistent rains in Hubli-Dharward, Gadag, Haveri among other places mostly in the northern parts of Karnataka flooded social media platforms on Monday.

Bengaluru too witnessed heavy rains on Sunday evening and Monday morning causing slow moving traffic due to flooding in several localities of the city.

Bengaluru FCs Sunil Chhetri and Chennaiyin FCs Calderon vie for the ball during the ISL 2018 at Kanteerava stadium in Bengaluru.

Defending champions Bengaluru FC were held to a goalless draw by a spirited NorthEast United FC in their opening game of the Indian Super League (ISL) Season 6 at the Sree Kanteerava Stadium here on Monday.

Debuts were handed out to several new signings, including Ghanaian World Cupper Asamoah Gyan, Raphael Augusto and Ashique Kuruniyan, but the teams couldn't be separated at the end of 90 minutes in what was a riveting contest. Bengaluru got off the blocks quickly and pressed NorthEast high up the field.

5. 141 Convicts Walk out of Prison to Start life Afresh

Tears rolled down the eyes of many while some faces were lit with joy and hope. Some others walked out with confidence of beginning life afresh, and everyone was in a hurry, rushing to join their families. This was the scene at Parappana Agrahara Central Prison on Monday when 141 convicts, who had spent 14 years in prison, were released.

The convicts, including a woman, were undergoing life imprisonment and were released keeping in view their good conduct in addition to their time served in prison. They were from prisons in Bengaluru, Mysuru, Belagavi, Kalaburagi, Vijayapura, Ballari, and Dharwad.