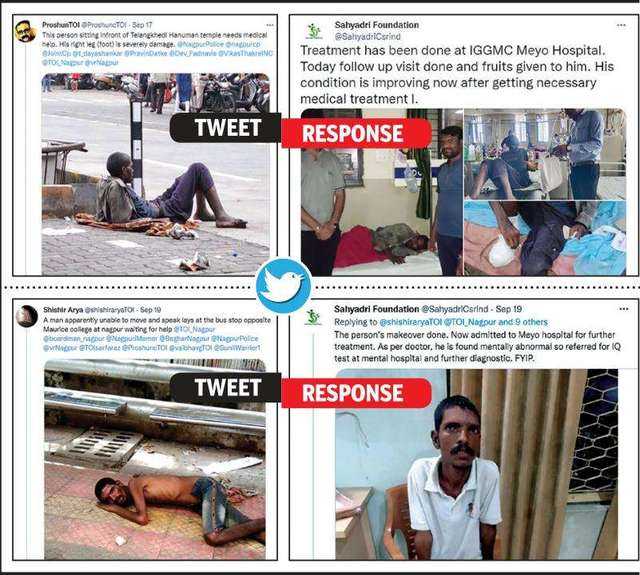 Nagpur: Two tweets posted by TOI reporters helped a badly wounded man and another sick man lying along roads in deplorable condition get instant medical help a couple of days ago. Taking note of the reportage, volunteers from Astha Beggars Rehabilitation Shelter swung into action and reached the spot to move the ailing men to their shelter home at Ghat Road.

Following assessment by social workers, one of the men identified as Babu Sen, a resident of Jabalpur, was later moved to IGGMCH. He had a badly injured foot with maggot infestation.

Identity of another man is yet to be known and he was found to be of unsound mind. He was admitted to Regional Mental Hospital (RMH) following court orders.

Gautam Nagare, warden of the shelter home, said they left for the spot after the civic chief forwarded Chakraborty’s tweet to them.

On September 19, TOI’s Shishir Arya had reported that a semi-naked man unable to move and speak was lying at a bus stop opposite Morris College. He sought help tagging @BegharNagpur and others.

Nagare said they took note of Arya’s tweet on their own. “We have around 80 inmates now at the shelter home. A pilot project is underway to make the city beggar-free. The initiative is being funded by Central government and implemented by Nagpur Municipal Corporation. We are surveying the city and trying to convince beggars to move to the shelter home. We also reach out in cases where there is no one to take care of an individual,” he said.

RMH medical superintendent Dr Purshottam Madvi said the unidentified man appears to be in his early 30s. “He has been diagnosed with psychosis. He has some swelling on leg. Communication remains an issue with such patients for some days as we don’t know his language. It takes sometime for the patient to settle down. Once the medication starts, the patient begins to speak and then we will possibly know about his identity and native place,” he said.

Babu (45) was under treatment at the surgical ward of IGGMCH. Doctors had planned to operate him on Wednesday. “His leg required amputation to prevent spread of infection to rest of the body. We had shifted him to operation theatre. But we had huge rush of other critical patients. So, we prioritized them on the basis of their condition. Babu’s operation was put off for Thursday. He escaped from the OT itself in the night,” an on-duty doctor said.

The doctor added that Babu was able to walk by dragging his bandaged foot.

Nagare and other volunteers started a search for Babu beside requesting the IGGMCH officials to seek police intervention in tracing him. “His leg is hurt, so he may not have gone far. We will trace and update his status soon,” he said.