Deafening thunder was heard as a lightning storm described as "apocalyptic" startled thousands in London this afternoon.

It spread panic across the capital as hail started coming down, leaving people dashing for cover.

The sudden storm broke out in a few minutes before 1pm today as the unexpected shower hammered down, catching many off guard.

Thunder followed three consecutive flashes of lightning and was then immediately was by intense rain.

Social media was awash with stories of being caught up in the wild weather this afternoon.

Speaking to Express.co.uk, another said: "I was frightened as the first lightning struck and then hail started coming down intensely.

"After the second thunder, I could hear alarms going off around my flat".

Heavy rainfall was evident in Westminster, as a Sky News live interview with Peter Bone showed. The Tory MP, beneath a red, white and blue umbrella, spoke as rain lashed down with thunder audible in the background.

Today's London weather forecast from the Met Office saw a "cloudy start" to the day with some "showery outbreaks of rain".

It may not be the last week see of the bad weather.

The UK is set to be battered by three days of thunderstorms, heavy rain and gale force winds.

It comes as what has been described as “revved up jet stream” brings in the storms from the Atlantic. 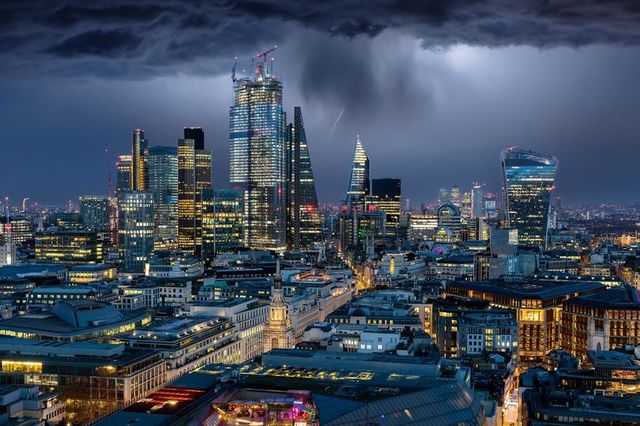 Met Office forecaster Aidan McGivern said: “Three days or so of rain, showers and a keen breeze especially on Wednesday and Thursday before the weather settles down for the weekend.”

Looking at today, Mr McGivern said that there will be “lively showers” up and down the country.

“Quite widely by mid-morning showers popping up just about anywhere and they will be lively in places, particularly in the south there will be hail and thunder where these showers occur,” he said.

“A keen breeze in the North East making it feel cool but further south, lighter winds, temperatures around average and away from the showers, particularly later and particularly towards the west there will be some sunny spells.

“The focus for showers on Tuesday evening, increasingly in the east, a slot of clearer drier weather crosses the country from the west.

"Under those clear skies the temperatures drop away with a touch of ground frost possible for some sheltered spots in Scotland.”