A video of a man being thrashed by police personnel in Chhattisgarh’s Mungeli has been circulated on social media calling out the behaviour of policemen after the Motor Vehicle (Amendment) Act, which has put in place hefty fines and new rules. 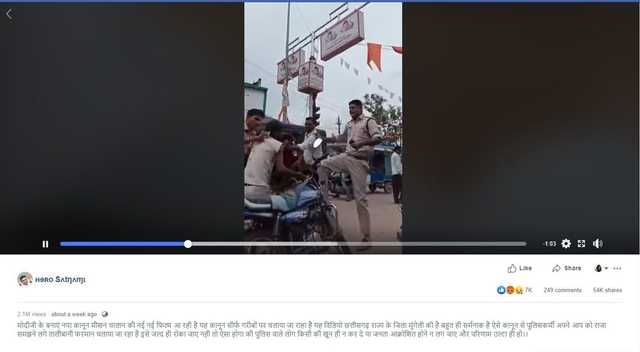 You can find the archived version of the post here.

Also Read: Old Video of Assault by UP Cops Goes Viral, But With False Context

It loosely translates to “New videos of (Prime Minister Narendra) Modi’s new law of (hefty) fines are surfacing. This law is only applied on the poor. This video is of Chhattisgarh’s Mungeli district. It is very shameful that policemen are thinking of themselves bigger than the law.”

It goes on to say that this law should be rolled back before police personnel murder someone or the public acts out of outrage.

The viral Facebook video, which was uploaded on 13 September, had over 54,000 shares at the time this story was written.

The new traffic guidelines with hefty fines were imposed in September this year and ever since, many commuters have been speaking out against it. Many states have refused to implement the Act entirely as well.

Also Read: Audio Note on Religion And Politics Passed of As Lakshmi Mittal’s

WHAT WE FOUND OUT

The video is from Chhattisgarh’s Mungeli but has been shared out of context. The man in the video had been drunk and the police was called to the spot by locals after he allegedly created a ruckus.

WHAT IS THE TRUTH?

After dividing the video into key frames, we conducted a Google reverse image search with the key words “मुंगेली छत्तीसगढ़ पुलिस”.

We found a report by Dainik Bhaskar, according to which the man was drunk and the police tried to stop him from escalating the situation.

SP Mungeli CD Tandon told The Quint that the incident took place on 9 September when the locals had called the police to stop two drunk men from creating ruckus in a public space.

CD Tandon, SP Mungeli“Two men were creating trouble in public place and the locals in the area called us. The incident is in no way connected to traffic fines or the Motor Vehicles Act.”

According to him, one man was already inside the auto and the police was trying to handle the other drunk man. Both were taken for medical tests which confirmed the excess alcohol level. They were later handed over to their families.

This is not the first video that has been circulated with false context of Motor Vehicles Act. Earlier, a video from 2017 Uttar Pradesh’s Basti was also falsely shared with the misleading context.

(Not convinced of a post or information you came across online and want it verified? Send us the details on Whatsapp at 9643651818, or e-mail it to us at webqoof@thequint.com and we'll fact-check it for you. You can also read all our fact-checked stories here.)