Bollywood actress Sara Ali Khan made her acting debut with Abhishek Kapoor's film Kedarnath opposite Sushant Singh Rajput. The actress was all praise for her first co-star as she not only learned acting from him but he also helped her ace Hindi language and its pronunciation. During the trailer launch of the film, Sara sang praises fro Sushant for being a wonderful co-star and had thanked him for helping her at every step. She also shared that Sushant is a selfless and a very giving actor.

Sara Ali Khan said, "I don’t know how I’ve done in the film. I’ve really, really tried my best. But I don’t think I would’ve been able to do any of it without Sushant. He has just been the most helpful person to have had. There were days when I was a little lost, I was a little scared, but he was just always hands-on. Whatever broken Hindi I speak, Sushant has taught me."

During the promotions of Kedarnath, Sara and Sushant were seen having blast during their interviews together. From dancing on their songs to Sara asking Sushant mimick her father Saif Ali Khan's 'wow' dialogues, the two had shared a very warm bond. They even appeared on Salman Khan's Bigg Boss 12 together and had a blast with the contestants.

After Sushant Singh Rajput's death, Sara was shocked and broken. Her father Saif Ali Khan told TOI, "I think Sara - I don't know if she wants me to talk about it - was very upset. Very, very, very upset. Shocked and then very upset. She liked him very much. She was quite impressed with certain aspects of his personality. She told me he was very intelligent, that he could discuss, you know, Jean-Paul Sartre and he could discuss various aspects of philosophy and engineering and that he had learned how to shoot with a bow and arrow left handed, and he was very fit as well as very hard-working, and a good actor."

He added, "She was kind of like very impressed by him on many levels, which is how I came across getting to look at him in a different way. And then when I did this guest appearance, he was really nice to me." 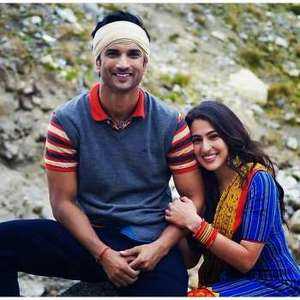 Kedarnath director Abhishek Kapoor had also penned down a heartfelt note for Sushant and wrote, "I am shocked and deeply saddened by the loss of my friend. We made two very special films together. He was a generous and fabulous actor who worked very hard to breathe life into his characters.. I pray for his family whose loss is unmeasurable. He was a huge science buff and was consumed by what lay beyond in the universe.. im going to miss u brother.. and stay interstellar."

Sushant Singh Rajput was suffering from depression from the last six months and was getting treatment. Police have found medical prescriptions and medicines from his room when they found him dead on June 14.

ALSO READ | Sushant Singh Rajput was to get married in November, family reveals