Having started his first class career at the age of just 15 in 2004-05, it was Shahbaz Nadeem’s showings in the Indian Premier League that got him into the limelight. From 2012 to 2013, Nadeem picked up 17 wickets in the league for Delhi Daredevils at a stunning economy rate of 6.47, second only to mystery spinner Sunil Narine.

Bagging the ‘Rising Star’ award in 2012, Nadeem, the only bright spot in an otherwise dismal campaign for the side, was termed as a limited-overs specialist – a misconception that the left-arm orthodox bowler was focused on changing.

"The selectors told me I'm a good limited-overs bowler since I finished as one of the most economical bowlers after Sunil Narine in IPL 2012. I knew I was doing enough in first class cricket too, but somehow only the T20 performances were noticed. That motivated me,” Nadeem had told ESPNCricinfo.

Shahbaz Nadeem“In my team, everyone knows I can do well in all three formats, but perceptions were based on IPL performances. Even then I was doing well in the Ranji Trophy, which I take very seriously. It is here that you should be judged.”

“For me, this is the finishing school. It shows how tough you should be mentally, and what level you are at,” he added. 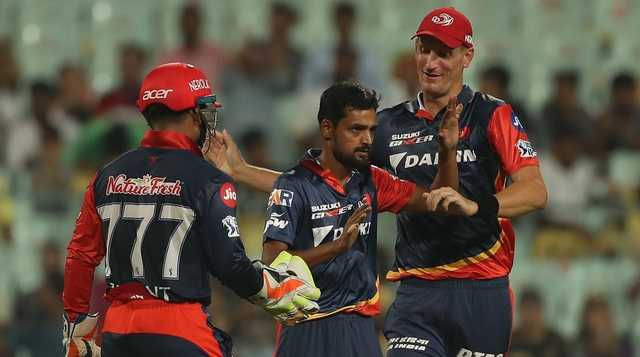 Shahbaz Nadeem celebrates a wicket during the 2018 IPL with his Delhi Daredevils teammates.

Despite the instant fame that came Nadeem’s way via the IPL, he was keen to grit it out and improve his first class numbers. In an age where players opt for the shortest format, the Indian’s stubbornness to prove that he had the skills to succeed in five-day game as well saw him make visible changes to his bowling action.

He concentrated towards flighting the ball more than just bowling flatter trajectories, just like his idol Daniel Vettori would. That, along with his canny pace variations, made him a tricky customer to face.

Nadeem emerged as the fourth highest wicket-taker in the Ranji season in 2012/13 with 42 scalps in 9 games, averaging just over 21.

He got a further 28 the following season, but it was in 2015 that he finally announced himself. 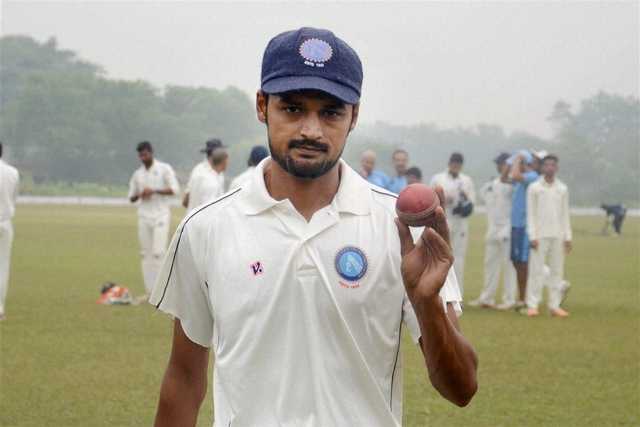 Sahabaz Nadeem poses with the ball after he took six wickets on the last day of the Ranji Trophy match against Tripura in 2015.

Nadeem went on to collect 50+ wickets in two successive Ranji seasons (2015/16 and 2016/17) and became only the second player after Kanwaljit Singh to achieve the feat. His efforts helped his side Jharkhand into the semis for the first time ever in the tournament’s history, though they were unable to go on to clinch the title.

However, his rise in the first class circuit saw a contrasting decline in his IPL returns. Nadeem has been unable to get more than 6 wickets in an IPL season since 2015, with his economy even touching 10 in the last two years. The player, though, harboured a Test dream and it all unraveled in strange ways as he received a call-up to the national team just 24 hours before Virat Kohli handed him his cap at his home ground. Shahbaz Nadeem receives Test Cap during day one of the third test match between India and South Africa held at the JSCA International Stadium Complex. Endless Sacrifices and a Debut to Remember

As Nadeem got a dancing Temba Bavuma stumped to grab his maiden Test wicket at Ranchi with a sharp spinning delivery, Assad Iqbal, his elder brother was busy tending to his wife Fariha as she was undergoing a minor surgery for a cyst removal.

Though the sparse crowd at the JSCA International Stadium erupted in unison and Nadeem’s teammates, with wide grins, went over to congratulate the 30-year old, the crowd was conspicuous by the absence of the player’s biggest support system.

It was 17 years ago that Assad stepped aside from the sport to allow his brother to chase his dreams instead. Their father Javed Mahmodd, a police officer in Dhanbad, had strictly stated that only one of his two sons could take up cricket as he could not allow both to pursue something that had no secure future.

“Back then, the decision was right. I even threw Shahbaz’s bat out of the house once in Bokaro. Assad was already captain of the Bihar under-15 side by then. But he convinced me to let Shahbaz play, as he had decided to opt out,” Mahmood, who is now in Muzaffarpur in Bihar after retiring as a deputy superintendent, revealed.

Mahmood, too, could not attend his son’s maiden game as he is in Chandigarh to undergo a routine medical check-up with his wife.

However, the ones who were present and the ones who watched Nadeem bowl on the television sets were in for a treat, as the player mixed it around to trouble the Proteas throughout his spell in the first innings.

He tossed the ball up, sent down deliveries that angled in, dropped the length of the ball and beat the rivals with superb seam positions that forced the batters to pull away. He returned to pick up Anrich Nortje’s wicket with a slider that had hints of an in-drift to bring curtains on South Africa’s first innings.

As he walked back with figures of 2/22 in 11.2 overs and an economy rate of just 1.36, Nadeem, who had desperately wanted to play for India, even if it was just a game, would have been a relieved man.

"I have played each and every format and at each and every level, except for India. It is always on the back of my mind that when I finish, I should complete the set. It doesn't matter if I play only one or two matches for India. The quest for the cap keeps driving me,” he had said two years ago.

The cap is his, only his quest is likely to change. A few more games, maybe?