Kamlesh Tiwari, president of a little known outfit, Hindu Samaj Party, was murdered in his house in Lucknow on Friday, 18 October. The police has arrested four people in connection with the case so far.

Chavhanke said that the video showed an excited Owaisi after Tiwari’s death. “Look at how brazenly Owaisi is dancing after Tiwari’s murder,” he added.

An archived version of the tweet can be seen here. 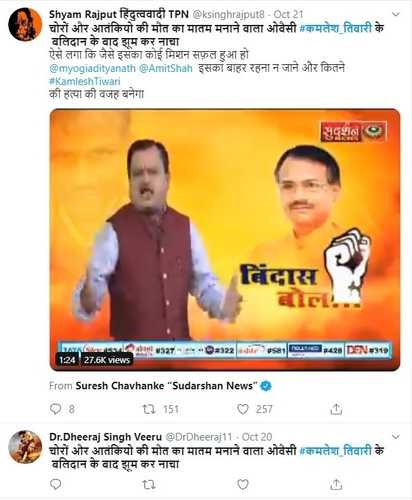 The claim made by Chavhanke is false. The video is from an election rally in Aurangabad which was held on 17 October where Owaisi broke into a dance step while getting off the stage, after addressing a crowd.

Owaisi’s step looked like the act of flying a kite, apparently making a reference to his party’s symbol. However, Owaisi later said that he wasn’t really dancing and somebody used a music audio to make it seem like he was dancing. “I stay away from music,” Owaisi had said.

Clearly, an unrelated video has been used by the TV channel to push a certain agenda. Earlier too, Sudarshan News has been caught spreading fake news on multiple occasions. Earlier this year, the channel had shared a video with the false claim that a Muslim mob carried out a procession, raising slogans against RSS.

(Not convinced of a post or information you came across online and want it verified? Send us the details on Whatsapp at 9643651818, or e-mail it to us at webqoof@thequint.com and we'll fact-check it for you. You can also read all our fact-checked stories here.)