As snowfall lashed the higher reaches yesterday, the plains experienced rain and the temperature plummeted by more than 10 degrees. 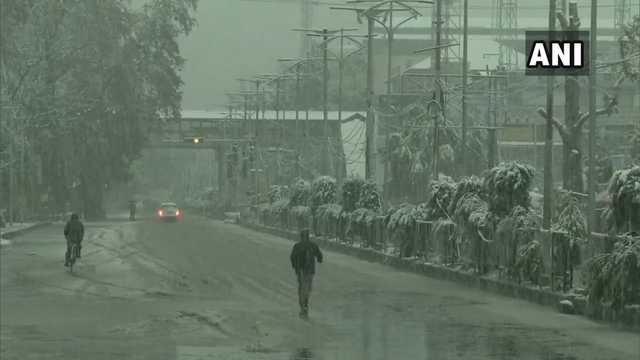 Two flights were cancelled in view of the snowfall in Srinagar today. Several other flights experienced delays due to congestion.

This snowfall in Kashmir marks the onset of winter season in the region.

Authorities have shut the Mughal Road in Rajouri following snowfall in higher reaches of the Pir Panjal mountains.

"Snowfall was witnessed in higher reaches of Kashmir valley including Gulmarg and Sonamarg in the wee hours today (Wednesday) while the city and other plains were lashed by rainfall," an official of the Met department said.

Apart from Kashmir, there was fresh snowfall in several areas of Himachal Pradesh including Solang Nullah in Kullu district near Manali, Churdhar in Sirmaur district, Gulba, Koksar in Lahul and Spiti.

Authorities have closed National Highway 305 for commuters after snowfall in Jalori Pass in Kullu. Today, the Met department has forecast rain and snowfall in Uttarkashi in Uttarakhand.

In Kashmir, the winter chill has set in early this year, officials said.